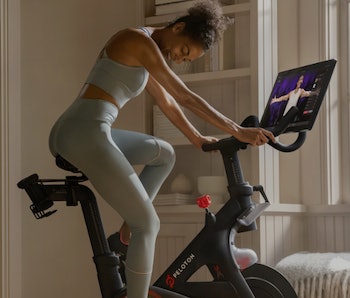 Peloton for iOS has gained support for Chromecast. Users can stream the company’s popular workout classes to any TV with native Cast support or an attached Chromecast dongle.

Peloton is famous for its slick in-home stationary bikes (and yes, that commercial) that connect to a digital platform of spinning classes taught by live instructors, with leaderboards that track participant performance and class rankings. For those who already have their own bike and don’t want to shell out $3,000 for Peloton’s, however, the company offers its classes through Peloton Digital for $12.99 per month.

Heretofore users of Peloton Digital could view the classes by propping up an iPhone or iPad on their bike, or beam them to a TV through AirPlay. That meant you had to own an Apple TV, however — with today’s update, anyone with a cheap Chromecast dongle can view Peloton classes on a big screen.

Expanding beyond the 1% — Peloton hopes that Peloton Digital subscriptions will help the company grow beyond the niche market willing to pay for its premium hardware. Right now, digital subscriptions account for about 30 percent of Peloton's revenue. Meanwhile, competition has heated up tremendously in the space for in-home exercise products since Peloton launched, with other companies offering similar bikes at lower prices and companies like Mirror offering their own unique fitness hardware at much lower prices.

The big downside with Peloton Digital goes back to Peloton’s secret sauce, which is how its bikes are designed to work natively with its classes, and vice-versa. You can still follow the classes with your own bike, but you’ll have to figure out the appropriate resistance adjustments on your own, and you won’t benefit from all the same analytics that you’d get if your bike were connected to the Peloton software. Some people use Peloton Digital to try out the classes before deciding whether or not to buy the bike — probably one reason why the company sells the subscription for a lower cost to customers who don't already own one of its bikes.