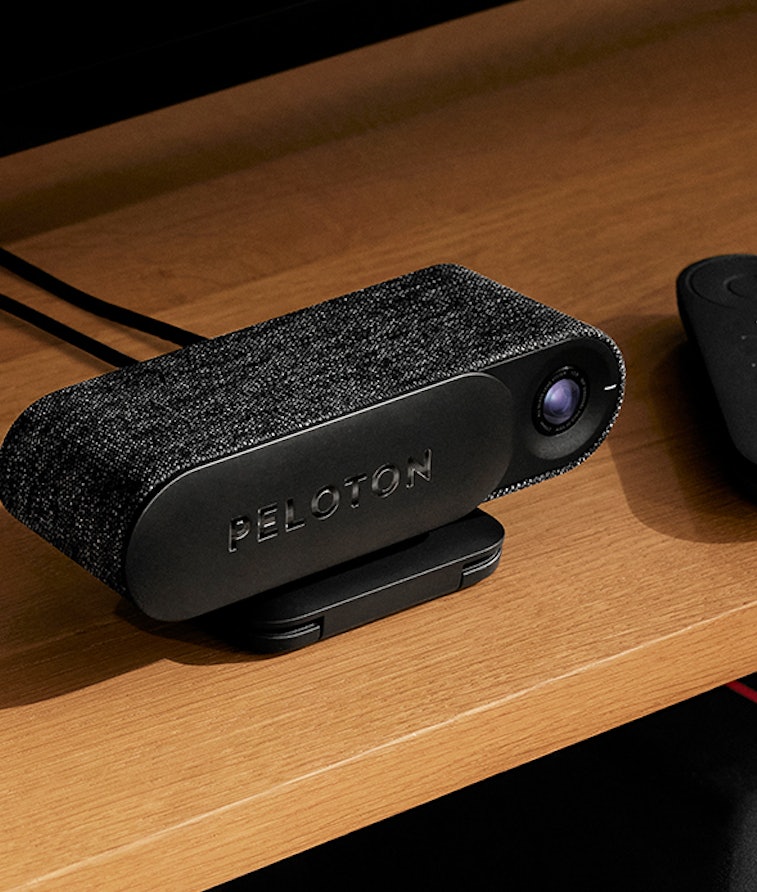 Wearing a smartwatch or fitness tracker is second nature for many people now — myself included — but the popularity of wearable fitness technology marked the crossing of a new boundary. Now companies handle physical, biological, and — frequently — personal information in a way they haven’t before, and it’s largely become normal.

A new frontier for fitness and wellness technology has already been identified, and it seems like its cameras. Take Peloton’s recently announced Peloton Guide. A $495 bundle that includes a connected camera, heart rate monitoring armband, and remote (weights unfortunately not included) coming out in 2022. The Guide hooks up to your TV and tracks your movements as you lift weights and perform bodyweight exercises. Seeing yourself live on-screen while you exercise is a big step up from just tracking your steps and heart rate.

Actually pointing a camera at you while you work out feels like its own boundary to be crossed, just like the one wearables broke. Fitness tech companies made peering into and attending a class virtually on devices like a Peloton Bike natural. Does that work the same when the fitness class looks back?

Peloton is not the first company to try out this idea. Just last week, Tempo announced the $395 Tempo Move, an interesting “dock” combined with storage for weights (and thankfully, the weights themselves) that uses the cameras on Face ID-enabled iPhones to track your workouts while you follow along on your TV.

Connected cameras are Tempo’s bread and butter. The company started with a connected camera for gyms called SmartSpot that did the form and posture tracking that informed the consumer-focused $2,495 Tempo Studio the company launched in February 2020, Techcrunch writes. The Move is a smaller, more approachable version of the flagship, that makes one pretty important change: it looks like a normal piece of furniture.

Mirror, purchased by Lululemon last year, offers some similar workout features and a built-in camera for $1,495, but in a package that might not stand out as much at home. When you’re not using it for virtual workouts and to attend live classes, it seems like it might actually pass as an actual mirror.

The point is, the options for connected fitness cameras, displays, and camera-adjacent products are becoming increasingly diverse, and increasingly common. A big recognizable brand like Peloton trying to muscle into the space seems to suggest this is where customers are, or will soon be.

The natural next question is most likely related to privacy (see all the drama over Google acquiring Fitbit). You saw the ghost fitness studio for Peloton’s cycling classes, or Tempo’s weight training workouts, but what do these companies actually see of your living room?

The Peloton Guide features a sliding cover that blocks the device’s camera and disables the microphone (added so you can use it to start and stop workouts with just your voice). It’s not entirely clear what data Peloton’s actually collecting with its camera during a workout, but you can shut it off, and the company does say it intends to improve the camera over time by feeding workout data to its machine learning model.

What do these companies actually see of your living room?

Tempo’s offerings also appear to have privacy in mind. The company’s privacy policy wasn’t updated to explicitly mention the Move, but Tempo tells Input for both the larger Studio and the new Move, the company only views an “unrecognizable skeleton” created from data collected by its 3D depth sensor (or iPhone camera). According to its privacy page, Tempo also only processes computer vision data on-device, meaning even if the company could see more than a wireframe skeleton, it wouldn’t be easily accessible in the cloud.

The Mirror’s privacy accommodations are the simplest. The camera is only active during live classes and you choose when to share footage of yourself by pressing a software button. You can also deactivate it entirely in the Mirror’s settings, and cover it with an included lens cap.

It’s not normal to have cameras hanging out in your house, just like it's not normal to have live microphones on your bedside table or a watch that periodically checks your heart rate and has a pretty good understanding of when you fall asleep at night. But at least for smart speakers and smartwatches, the oddness (and loss in privacy) is rewarded in functionality people find useful. Devices like the Tempo Move and Peloton Guide seem set up to make the same case for unobtrusive connected fitness cameras, but it's important to not forget how tricky a ground this is to walk.

Fitness tech products became popular during the pandemic because the gym felt unsafe, but I also wager the idea of working out without someone watching you or without feeling embarrassed also played a role in the recent boom. Even if your curls and squats are only being used to improve an algorithm, a camera still feels like an eye, a thing in the room impassionately observing you. It remains to be seen whether fitness features help cameras melt into the background the same way they normalized smartwatches.