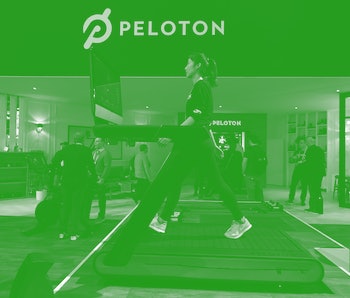 Home workouts are still very much in, thanks to everyone’s favorite ongoing pandemic. Peloton, the once-maligned home fitness equipment maker, has taken advantage of that market push — and it’s now releasing two new pieces of exercise equipment to its lineup.

The company’s long-rumored new offerings are now official: an updated indoor cycling bike called Bike+ and another treadmill called the Tread+. Fans and indoor exercise enthusiasts on the lower end of the income spectrum will be disappointed to find out, though, that newer, less expensive treadmill model won’t ship until the beginning of next year.

“We feel like we’re just getting started,” said Peloton CEO John Foley. “Our goal is to be the go-to at-home fitness solution for as many people as possible…especially in a world where people are increasingly working out at home.”

The plans for both of Peloton’s new machines were leaked last week to Bloomberg, which takes a little of the wind out of the company’s sails. Still, though, the new equipment shows Peloton’s fanbase is still growing — even if the company has never broken even.

Some upgrades — Peloton is, for the most part, sticking to the roots that have brought it to where it is today. Both the Bike+ and Tread+ are luxury devices, and they’re both set to connect to the company’s $39 per month subscription service for live exercise classes.

The new Bike+ includes a 23.8-inch rotating touchscreen and a four-speaker sound system. It will also ship with the option to — finally — pair the bike with your Apple Watch. It’s set to retail for about $200 more than its predecessor at $2,495 and will be available for purchase tomorrow.

The new Tread+ will retail for the same price but won’t be available until early 2021 in the U.S. and Canada. It will drop first in the U.K. the day after Christmas. Unlike the Bike+, the design of the new Tread+ won’t differ much from its predecessor — but it’s nearly $2,000 less, which is sure to be enticing for consumers.

Peloton’s doing great — In its nearly eight years of making exercise equipment, Peloton has never quite caught on. It’s expensive for the average consumer, and most people just went to a local gym if they wanted to take an exercise class.

But the pandemic has changed all that for obvious reasons. As at-home workouts continue to be the most popular exercise option for much of the world, Peloton finally caught on. Its shares increased more than 180 percent this year, bringing its market cap to $22.8 billion.

Other companies have also caught onto the at-home workout trend; SoulCycle launched a more-expensive but feature-packed competitor in March, and Lululemon purchased existing rival Mirror for an estimated $500 million at the end of June. Still, though, Peloton seems on top. We’ll know for sure later this week; the company plans to release its Q2 earnings report on Thursday. As the company’s CEO says, it looks like Peloton is just getting started.