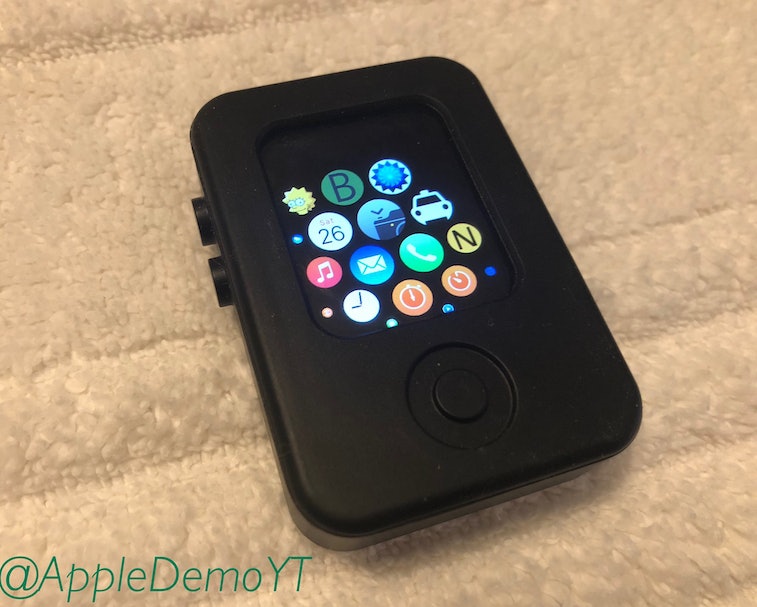 Much intrigue surrounds Apple prototypes, if only because the company so closely guards them that seeing one is a rarity — prototypes are reportedly destroyed after Apple is finished testing them.

The most infamous instance of a prototype escaping Cupertino was when an Apple employee accidentally left a pre-production iPhone 4 at a bar and the world got a glimpse at the lengths the company goes to hide its work. Now it's the original Apple Watch that we're seeing in prototype form if pictures shared on Twitter are to be believed.

An iPod on your wrist — The images show an Apple Watch covered by the same type of bulky case that Apple used to make the iPhone 4 prototype look like an iPhone 3GS.

A fake scroll-wheel of sorts at the bottom makes the Apple Watch appear to be an iPod — which would make sense because pre-Apple Watch, people made pseudo-smartwatches by placing an iPod Nano in a custom wristband. The public was much more prescient here than when it predicted that Apple would make a netbook instead of the iPad.

The images also show that some UI elements seen in watchOS today were present from the early days, like the watchOS homescreen, which was then referred to as "springboard zoom." There are also menu elements that look like what you see today.

Back in 2015 when the Apple Watch was released, Wired reported that the first prototype was actually just an iPhone attached to a velcro strap, with an attachable dongle that featured the digital crown. But as you can see, the physical design of the Apple Watch hasn't changed much since its release.

Slow success — The original Apple Watch was widely panned for its complicated user interface, sluggishness, and heavy reliance on an iPhone. Apple eventually improved the UI by introducing multitasking and complications, so users didn't have to constantly navigate through that honeycomb homescreen of tiny app icons. It also began hosting apps locally on the Watch, independent of the iPhone, which improved load times.

Eventually, people started warming to the Apple Watch and now it's a major business for the company with an estimated 30 million units sold in 2019 alone. Moreover, despite the Apple Watch only recently adding the option to operate separately from an iPhone (but then still dependant on access to one for setup), Apple has no real competition in the smart watch space, despite Samsung's best efforts.