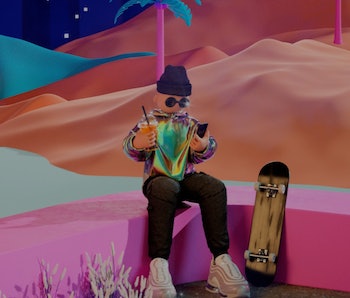 Authentic sharing — The idea is a play on existing concerns around social media making people feel insecure, because users only share the best moments in their lives. The pressure is to share perfect moments, but that means plenty of other moments enjoyed with friends don’t make the cut. With Poparazzi, the emphasis is on preserving authentic moments with friends, even if they’re not perfect or edited.

The app by far isn’t the first to launch under this conceit. Another app that launched recently, Dispo — co-founded by controversial YouTube star David Dobrik — works like a “disposable camera” where you snap photos and have to wait 24 hours to see them appear in the feed. And there’s of course Clubhouse, the social audio app where conversations are live and unedited.

Unlike those two apps, which remain invite-only, anyone can download Poparazzi and starting using it now.

Growth hacks — The concept behind Poparazzi raises immediate privacy concerns — you are, after all, encouraged to share raw photos of your friends. But the app at least requires you to tag friends from your contacts list in the photos, and they receive a text message telling them that a new photo of them has been posted. Users can choose to remove any photo from their profile that they don’t like, or toggle their account to private so only approved users can tag them.

Poparazzi has raised $2 million in funding, according to Crunchbase, and says it reached 10,000 users during a beta period. Whether or not it will succeed in the long-term is anyone’s guess. The entire app feels like it’s been designed to grow like crazy. When one person begins using the app, their friends begin receiving a flurry of texts that photos of them are being shared in some newfangled app. Obviously anyone is going to want to check it out and make sure nothing sensitive is being published, so they download the app. The app also, weirdly, has a very punchy onboarding video designed to get people excited, and then immediately prompts them to give an App Store rating before they’ve actually tried it out.

More like this
Ian Campbell
5.23.2022 6:30 PM
Squircle
Instagram's visual refresh doesn't make me want to click buy
Will Gendron
5.24.2022 11:34 PM
Tech
Coinbase has been testing an app that allows staff to rate each other
Andrew Paul
5.23.2022 8:06 PM
Save the Data
Zola handles massive wedding registry breach in worst way possible