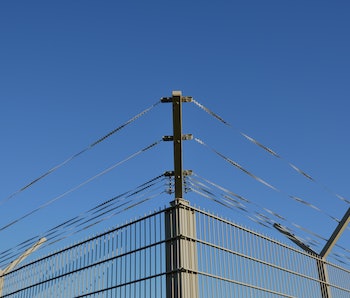 Global Tel-Link Corporation filed a patent for a new virtual reality software it intends to license to prisons that would tease its inmates with a false, digitized freedom. According to Global Tel-Link’s own application description, its VR service would allow the incarcerated to “for a brief time, imagine himself outside or away from the controlled environment.” Obviously, there is no way in hell this would come cheap to inmates, who already pay offensively large amounts for phone access.

The news comes courtesy of an announcement yesterday from the Electronic Frontier Foundation (EFF), which lays out the newest, horrific example of advancements within the extremely lucrative panopticon-industrial complex. Although the idea initially conjures images of prisoners wearing VR headsets strapped to their heads inside oppressive jail cells to conjure wide open meadows and blue skies, it sounds like the patent would more likely be used for video chatting with loved ones akin to Skype or Zoom sessions.

Apart from whatever horrific psychological toll would be inflicted on jailed bodies, an EFF senior staff technologist explained to Motherboard that the invention will “also erode any last vestiges of in person connection between prisoners and their loved ones on the outside and provide prisons yet another avenue for surveillance." TGIF.

Augmented reality for security guards, too — Prisoners aren’t the only panopticon members Global-Tel Link are hoping to extract money from. The company also filed an addition patent detailing an augmented reality system for correctional officers to help aid in surveillance and monitoring prisoners — or, as the EFF describes it, “essentially ‘Google Glass: Prison Edition.’”

This wearable tech aspires to allow guards the ability to employ facial recognition on prisoners to display information like names and crimes, along with “rogue radio frequency signal” detection for contraband phones. “Further, it reportedly has object detection powers, and can highlight any dangerous or contraband objects such as weapons or open doors which should be closed,” explains the EFF. Of course, if this kind of AR product ever sees the light of day, it will undoubtedly cost prisons millions of dollars to license and utilize... much of which would obviously come from taxpayer money. If the idea of paying for prison guards’ Oculus Quests disturbs you, congratulations: you a still a functioning, rational, humane person.