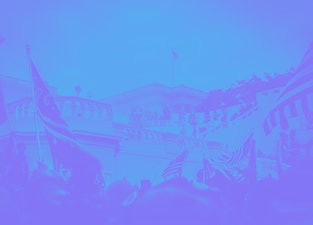 Roughly how much white nationalist Tim Gionet reportedly made on DLive.

Right-wing figures who participated in Wednesday's rampage on the U.S. Capitol might have been shut out of mainstream social media, but they found ways to persist nonetheless. According to The New York Times, white nationalist Tim Gionet made more than $2,000 broadcasting his actions inside the Capitol on livestreaming site DLive. He has previously been banned from Twitter and YouTube.

Facebook, Twitter, and YouTube have aggressively clamped down on harmful content since the November election. In an unprecedented escalation, President Trump was permanently banned from Twitter on Friday over incitements of violence at Wednesday's protests. Such moves have led many in the right-wing to announce their departures to alternative "free speech" social networks like Parler, Rumble, and DLive.

Fringe web — These networks may find some permanence beyond Trump's presidency, but they're unlikely to ever rival the mainstream networks. Social media is fueled by division, and if conservatives can't own the libs on Parler, it just won't be as entertaining.

Functioning as a business is also an issue when anything is allowed. Advertisers prefer to associate themselves with "safe" content. And hosting providers are frequently targeted for doing business with extremist platforms. Apple, for instance, today announced it will remove Parler from the App Store unless it cleans up questionable content on its service. It, along with Google, had been facing pressure since Wednesday to address the app.

Eventually, some faction on a social network starts sharing vile white supremacist content and the network's operators are forced to make the same choices as Facebook, moderating content in the interest of protecting their business. Ultimately the networks either get pushed to the darknet, like 8chan, or they implement bans on hateful content and their users go elsewhere.

Growth, growth, growth — DLive said in a statement to the Times that it has "zero tolerance toward any forms of violence and illegal activities." The company added that it was freezing the earnings of streamers who had broken into the Capitol. Some users of the site told the Times that it only loosely enforces its prohibited speech policies, however, because far-right streamers generate a lot of money and have become a big growth driver for the site. Users can contribute digital coins to their favorite streamers, which can be exchanged for real money.

DLive was a home to extremists even before Wednesday's events. One of the top earners on the site is Nick Fuentes, who attended the 2019 white supremacist rally in Charlottesville, Virginia and argues for "Christian nationalism." He began broadcasting on DLive after being banned from Twitch.

The company seems to conveniently hide most questionable content behind the "X Tagged Content" filter. Disabling that filter makes the content on DLive look much less innocent than simple game streams that appear on the PG-friendly homepage.

In messages obtained by the Times, Charles Wayne, the CEO of DLive, is quoted as saying that removing white supremacists could hurt growth. “If today we ban everyone controversial on DLive, the difficulties we will encounter on the growth will be 10x more than having them.” He instead suggested ignoring white supremacists and focusing efforts on bringing legitimate video game streamers to the platform. It seems unlikely they'll want to do that if it continues allowing such blatantly hateful content to fester.