Remote working due to COVID-19 is fuelling Microsoft's sales boost 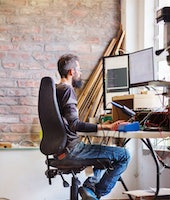 How much Microsoft made in its first coronavirus-tinged quarter.

Microsoft announced its quarterly earnings on Wednesday and business is booming. Lifestyle changes surrounding COVID-19 social distancing measures have boosted just about every segment of its business, according to Bloomberg. One of the big wins? Teams, Microsoft's answer to Zoom that now has 75 million active daily users, an increase of 110% from the previous quarter. Revenue saw a 15 percent year-over-year increase and resulted in profit of $10.8 billion.

Those working from home are using more cloud services and building out their personal PC setups while those laid off or simply looking for an escape have leaned into gaming. All of which is proving great for Microsoft's bottom line.

Microsoft is more than fine — Though small businesses haven’t been purchasing licenses like they used to, the remote workforce is picking up the slack. Thanks to years of building more robust cloud services, the company was more than ready for the sudden onslaught of demand. Combined with Microsoft’s general subscription model for its software, the preparedness has locked in many new customers. At the same time, despite managing to screw up Skype, the Teams is proving an attractive alternative for those wary of Zoom because of its growing number of controversies, missteps, and security flaws.

“We’ve seen two years’ worth of digital transformation in two months,” said Microsoft CEO Satya Nadella in an earnings call. “From remote teamwork and learning, to sales and customer service, to critical cloud infrastructure and security – we are working alongside customers every day to help them adapt and stay open for business in a world of remote everything.”

Hardware made gains, too — On the hardware side, though initially concerned about manufacturing delays in China, the company is thriving as those who can work from home make their personal setups robust enough to handle their work. Meanwhile, on the gaming front, Xbox revenue has made modest gains of 2 percent, but that could be due to would-be buyers holding off for the next-gen console due out later this year.

As the stock market continues to flounder, Microsoft shares went up 5 percent following its results announcement. But whether it can maintain those numbers if the economy remains locked down for months remains to be seen. For now, though, it's sitting pretty. Especially with everyone from Google to Facebook trying to get in on the video-conferencing market, Sony planning a console of its own, and consumers likely to further tighten their belts if the coronavirus crisis draws on into the summer.