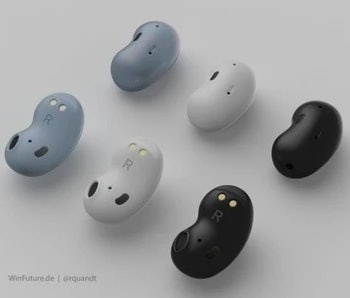 Samsung is reportedly working on a new version of its Galaxy Buds that look like, well, beans. The Galaxy Buds are Samsung's truly-wireless earbuds that compete with Apple's AirPods, and in our review we found they're the best alternative to AirPods on the market today.

The information about the new Galaxy Buds comes from WinFuture, which published these renders of what the new version will purportedly look like:

According to the WinFuture report, the new Galaxy Buds will have an "outside channel" for better audio and multiple microphones for improved call quality. They will also have sensors to detect whether the earbuds are in your ears or not.

The Galaxy Buds are already worth your money — Besides that the report is thin on details. The design of the Galaxy Buds hasn't changed much over two generations, though we were very impressed with the latest iteration, the Galaxy Buds+. We found that while they did have some issues, they were so minor as to be forgivable. The Galaxy Buds+ have great battery life, solid sound quality, and passive noise-cancellation that does a good job of blocking out ambient sound.

It'd be great if Samsung is able to introduce active noise-cancellation with these new Galaxy Buds, but either way at $149 they're still a great option for anyone who wants to stand out from the AirPods crowd. The AirPods are estimated to hold 60 percent of the wireless earbuds market. Don't you want to be a leader, not a follower?