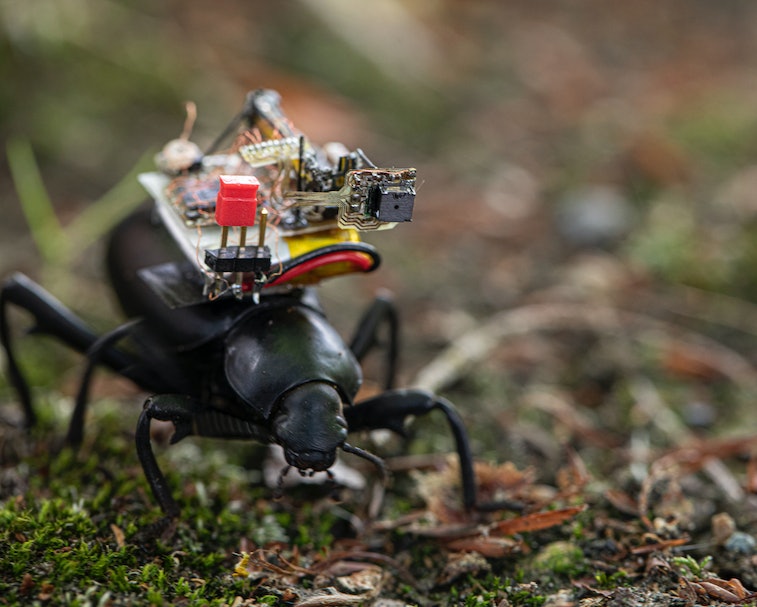 Researchers at the University of Washington have created a tiny camera that can fit on the back of a small insect. The camera could be useful for studying how bugs respond to their environment, or seeing the world from the perspective of a bug in a way that hasn't been possible before. It's basically a GoPro for insects.

Designing a super low-power camera — Bugs are really small, so creating a usable camera that fits on top of one required taking cues from insects themselves. The team explains that vision requires a lot of energy, and as such bugs can't afford to have the same wide field of view as humans. They oftentimes instead have a small, high-resolution region of their eye that's devoted to visual processing, and rely on turning their heads to steer where they want to see something.

A camera small enough to fit on a bug is similarly going to need to be good at conserving energy, since it could only weigh about 250 milligrams, or one tenth the weight of a playing card. So the team created a camera system that streams to a smartphone in black-and-white and only captures video at 1 to 5 frames per second. In order to see a 60-degree field of view, the camera is attached to a mechanical arm that can be moved back and forth using little jolts of electricity. There's also an accelerometer that will turn on the camera only the bug moves.

The result is a camera that uses very little energy – the battery lasts one to two hours if it's streaming continuously, or up to six if only turned on when the bug moves.

As you can see above, the image quality isn't exactly great, but it's definitely clear enough to see objects in the environment. And stitching together individual images creates a higher-resolution image than if a wide-angle lens were used. Wide-angle lenses create an image with the same number of pixels as a telephoto lens, but stretched out over a much larger area.

“This is the first time that we’ve had a first-person view from the back of a beetle while it’s walking around. There are so many questions you could explore, such as how does the beetle respond to different stimuli that it sees in the environment?” said co-author Vikram Iyer. “But also, insects can traverse rocky environments, which is really challenging for robots to do at this scale. So this system can also help us out by letting us see or collect samples from hard-to-navigate spaces.”

You can truly be a fly on the wall — The cynics in us imagine more sinister applications for a camera that can fit on a tiny bug, like spying. The team acknowledges this and says that it wanted to make the technology public so people can start coming up with solutions to address potential privacy implications.

And in case you're wondering, the bugs are fine. The researchers say they designed the camera to ensure the insects could still move properly. The insects used to test the cameras lived for a year after the experiment ended.