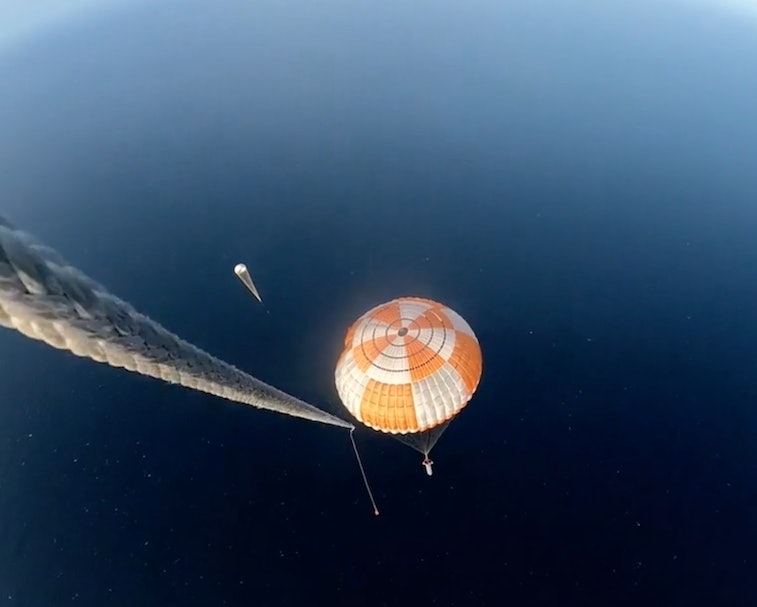 The maneuver is part of Rocket Lab’s plan to reuse its Electron boosters in future missions to save costs and launch more frequently — an alternative to the vertical landing method of Space X’s Falcon 9 rocket.

Catch and drop — Rocket Lab’s “There and Back Again” mission launched from New Zealand’s Mahia Peninsula at 10:49 a.m. local time. The company’s modified Sikorsky S-92 helicopter met up with the booster as it hurtled back to Earth over the Pacific Ocean.

The booster was intercepted at 6,500 feet by using the helicopter to attach to a parachute line. Ultimately, it was only held briefly before it was dropped into the ocean because “the helicopter pilot detected different load characteristics than previously experienced in testing.” Still, this deceptively simple method of saving and reusing rocket parts seems to work.

Rocket Lab’s CEO, Peter Beck, shared a video on Twitter that gives you a pretty good look at what the helicopter pilot’s saw on their way to catch a rocket.

Further tests — While the catch didn’t go entirely as planned — preventing boosters from getting water damage is one of the reasons for this method — Rocket Lab intends to use what it learned here in future missions.

“Bringing a rocket back from space and catching it with a helicopter is something of a supersonic ballet,” Beck said in a statement after the mission. “From here, we’ll assess the stage and determine what changes we might want to make to the system and procedures for the next helicopter catch and eventual re-flight.”

Considering this early success, using a helicopter to catch a booster seems to be a viable alternative to SpaceX’s Falcon 9 method. The real test is how reproducible Rocket Lab’s success is, and determining that will require even more time to test.