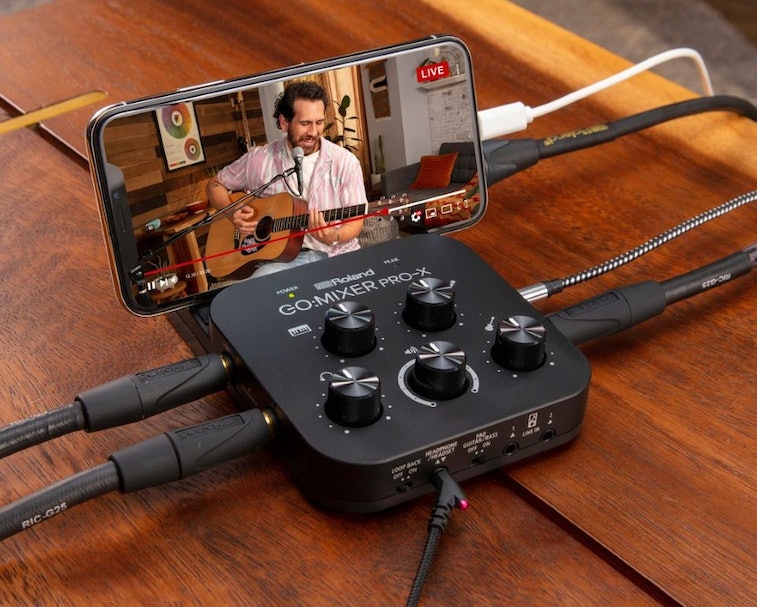 Smartphones and tablets are quite capable computers, but they still lack some things a desktop has, like an array of inputs. Thankfully, audio equipment maker Roland has unveiled a new mobile mixer that connects professional recording equipment and instruments to phones or tablets.

The Go:Mixer Pro-X is ideal for artists who want to deliver pro-level sound to platforms like YouTube or Instagram, and comes at a time when those same platforms are releasing more tools to help independent creators monetize their work.

Easy to use — The Go:Mixer Pro-X is relatively straightforward to use. The device connects to an iOS or Android device using included adapters, and multiple inputs allow for connecting microphones, musical instruments, and other devices to line-level devices. Knobs on the top let you control the volume of each connected instrument.

The palm-sized mixer uses four AAA batteries, or it can be powered directly by a smartphone.

The Go:Mixer Pro-X is a successor to the original Go:Mixer Pro, which has been a popular solution for mobile recording for years now. The new version hews closely to the original save for some slight changes, like the addition of two extra input channels and a greater focus on streaming.

Be like the pros — Roland specializes in equipment for making music. But you could also imagine Go:Mixer Pro-X being suitable for podcasters who want to be able to conduct shows from anywhere. Now you just need your smartphone, a studio microphone, and this mixer and you’ll be ready to pursue your podcasting dreams. Roland says it’s developed software so that its mixer easily integrates with a phone’s camera and livestreaming apps.

The Go:Mixer Pro-X is priced at $149, though a shipping date isn’t yet known.