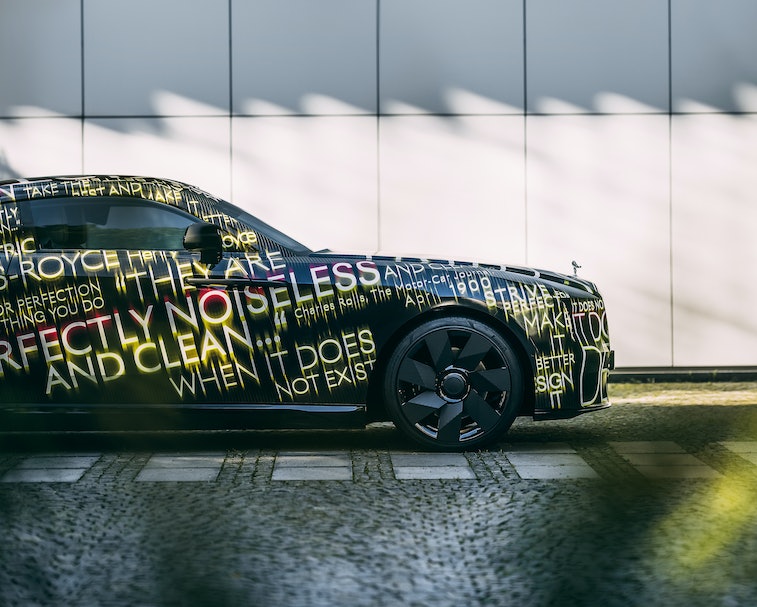 Luxury automaker Rolls-Royce has unveiled its first all-electric vehicle: the Spectre. Well, sort of unveiled. Our first look at the Spectre is pretty much the bare minimum.

Rolls-Royce CEO Torsten Müller-Ötvös announced the Spectre by speaking first to the company’s roots. Müller-Ötvös writes about Charles Rolls, one of the company’s co-founders, who took a drive in an early electric vehicle all the way back in 1900. At the time, Rolls called the electric car “perfectly noiseless and clean,” with “no smell or vibration.” He didn’t leave the ride feeling electric vehicles would be a serviceable product for “many years to come,” though.

Now, 117 years later, Rolls-Royce is at long last getting ready to drive an all-electric vehicle of its own out onto public streets. The company’s goal is for the Spectre to be only the beginning of its electric car production. By 2030, in fact, Rolls-Royce hopes its entire lineup will be rid of gas-guzzlers.

Looks like a Rolls-Royce — Here’s what we know so far about the Spectre: it exists and will run entirely on electricity. Rolls-Royce is still keeping most Spectre cards close to its chest. No expected driving range or performance specs have been provided yet.

Even the car’s appearance is still under wraps. The first look provided by Rolls-Royce shows off the Spectre’s basic body style, but everything else is wrapped up with camouflage. It looks very much like Rolls-Royce’s more general contemporary aesthetic, which the company has taken to calling the “Architecture of Luxury.”

Here’s a more, erm, abstract glimpse at what Rolls-Royce hopes to convey with the Spectre:

The emotions evoked by such mysterious names are of slight unease and heightened apprehension. Humans are naturally anxious about ghostly apparitions which inhabit an inexplicable environment which is not of this world. These phantasms seem like illusions – they are there, but not there, ephemeral in their rarity, totally silent as they pass through our life-space, fleeting in their appearances and gone in a whisp of time. And when they transit through our world, they create a sense of wonderment and a belief that we have encountered something untethered to our existence, an anomalous apparition.

This forceful alternative reality is fearful, but intriguing; threatening, yet attracting; beyond understanding, yet we lust after it. And only a few of us, indeed only a select, bold few, can cross the divide and command these transient, spectral beings to heel.

Ready for the future — Along with the Spectre, Rolls-Royce announced that its entire lineup will be all-electric by 2030. The company joins the likes of Volvo and Cadillac in pivoting to a fully electric production lineup by the end of the decade.

Rolls-Royce doesn’t have anywhere near the same industry sway as those brands, though — the company sells about 4,000 vehicles in a good year. The decision to go all-electric is a savvy one, nonetheless, given how very quickly the world is turning against gas-guzzlers.

The Spectre will begin testing on public roads in the near future, so we may glimpse the full design sooner rather than later. It’s expected to deliver to customers beginning in the fourth quarter of 2023.