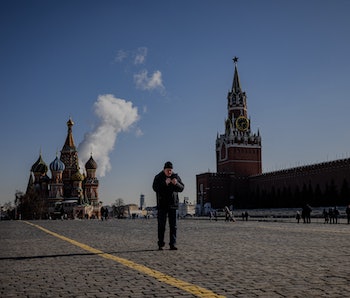 In a perfect case of sweet, sweet karma, the Russian government tried to throttle Twitter and accidentally took its own sites down in the process. The issue seems to have been caused by a simple programming error and affected a range of sites including Microsoft.com and Reddit.com.

Dubious block — The Russian government announced on Wednesday that it would throttle Twitter over alleged posts featuring suicide, child exploitation, and drug use. The social network isn’t popular in Russia, but opposition leader and anti-corruption campaigner Alexei Navalny is big on the platform, which is used by journalists and other important figures in the country.

Navalny’s arrest in recent weeks caused widespread protests across Russia. The government has tried to force sites including Twitter to take down content encouraging participation in anti-corruption protests, activities that seem to have shaken President Putin, who has taken fire over the “Putin’s Palace” documentary created by Navalny that investigates the sources of his wealth. In that light, the explanation for banning Twitter seems like little more than cover.

Hours after the government announced the move against Twitter, people across Russia began noticing that other sites had gone offline, including that of Rostelecom, a Russian state telecommunications company.

The explanation for the widespread outage isn’t certain, but according to Rest of the World, experts think that when the Russian government tried to block t.co, Twitter’s link shortening service, it likely didn’t confine its block strictly to that domain — a website address simply needed to include that string of characters to get caught in the dragnet.

According to Doug Madory, director of internet analysis at Kentik, “Russia uses deep packet inspection appliances in order to censor internet traffic,” checking domain requests coming from people’s devices against a list of blocked domains. If a request matches the domains the government wants to block, users can be prevented from accessing the site.

N00bs — If Russia wanted to limit its ban to just t.co, it would have needed to use an expression like \bt.co\b. In programming parlance, that’s a boundary expression that would match the domain t.co but not, say, Microsoft.com. A junior level programmer could have avoided the government’s mistake.

For a country synonymous with sophisticated hacks, it’s kind of surprising that this isn’t even the first time Russia has flubbed a website block. In the past it tried to ban the secure messaging app Telegram by blocking its IP address. But Telegram was hosted on a shared Amazon server, meaning other sites hosted on the same server were also taken out.

Russia has over the years increasingly tried to tighten its grip over the internet by requiring internet providers install equipment that would allow the government to surveil users and block content. Russia hopes it can block information on the open internet since it doesn’t have the same type of local alternatives to major sites like those found in China.