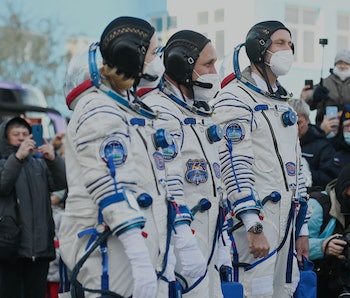 A Russian film crew successfully docked at the International Space Station (ISS) on Tuesday to shoot the first movie ever filmed in space (at least as far as feature-length films are concerned).

The Russian Soyuz spacecraft carried actor Yulia Peresild, director Klim Shipenko, and cosmonaut Anton Shkaplerov. The movie, titled, The Challenge, “follows a female surgeon who has to perform an operation on a cosmonaut too ill to return to Earth immediately,” according to IMDB. Both Peresild and Shipenko received cosmonaut training earlier this year and are expected to spend twelve days in orbit.

Excessive — You have to wonder whether these efforts are worth it considering the astronomical (no pun intended) cost — ferrying goods to the ISS will run you anywhere from $2,000 per kilogram up to $20,000/kg.

Of course, in today’s economy and amid a global pandemic, it’s easy to criticize these gratuitous undertakings. There’s no reason to film in space, and an eight-minute video shot at the ISS in 2008 suggests that it won’t be easy either. Without gravity, it’ll be difficult to control action shots, and fast-moving scenes — like the ones commonly seen in space movies filmed on Earth — won’t be possible.

We all know the movie is probably going to be bad since filming in space is definitely going to be a marketing ploy. Why waste resources and be a distraction to the actual astronauts aboard the ISS for this?

Devil’s advocate — There have been other well-publicized, commercial space missions recently, including tourism flights launched by Virgin Galactic, SpaceX, and Blue Origin. Defenders of these programs argue that they help generate renewed interest in space, preserving Earth’s natural beauty, and they could help fund these companies’ real work of developing commercial space operations and expanding humanity into the stars. Any research that results from their public space flights can also advance the sciences.