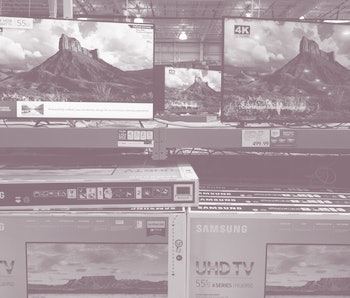 Samsung has added a new “Television Block” feature to disable smart TVs from afar in the case of a unit being stolen from a warehouse or retailer. The company said in a press release that Television Block is “already pre-loaded on all Samsung TV products.”

And it doesn’t just exist — Samsung is actively utilizing the feature for large-scale theft operations. Samsung activated the TV block feature on every single television set looted from a company warehouse in Cato Ridge, South Africa in July. The company says this action was taken in line with its commitment to reopening businesses and minimizing the loss of jobs on account of the ongoing unrest in the area.

It’s unclear whether Samsung plans to only use Television Block for mass cases like the looting in South Africa or if the company might also consider activating it on an individual basis, in the case of a consumer’s television being stolen from their house, for example.

Completely disabled — Samsung has provided only the briefest of overviews for those of us wondering how, exactly, Television Block operates. Samsung says the feature “detects if Samsung TV units have been unduly activated” and ensures TVs can only be used “by the rightful owners with a valid proof of purchase.”

Basically, all we know is that, once a TV has been connected to the internet, its serial number is checked against some sort of ongoing list Samsung keeps of TVs that have been confirmed as stolen. If the serial number is a match, Television Block will disable all TV functions, rendering the television useless.

This system’s only flaw is an inherent one: It can only work on stolen TVs that are actually connected to the internet. If I stole a television and knew Samsung could disable it via an internet connection, I would simply use it with a cable box that does not connect to the internet.

Could prove troublesome — Samsung has, thus far, only used Television Block on one occasion that we know of, and that circumstance was unusual in that the theft occurred in Samsung’s own warehouse. It would’ve been pretty simple to run that list through the Television Block servers and take out all the stolen TVs in one blow.

Samsung hasn’t said yet whether or not it will offer Television Block as a service for individual customers. Opening it up to the public could bring on an entirely separate slew of problems for Samsung — imagine, for example, if a bad actor decided to submit a bunch of random serial numbers as supposedly “stolen,” thereby disabling legitimate owners’ TVs.

And, like all internet systems, TV Block is also likely susceptible to hacks. Imagine if a hacker decided to render the vast majority of Samsung TVs completely useless.