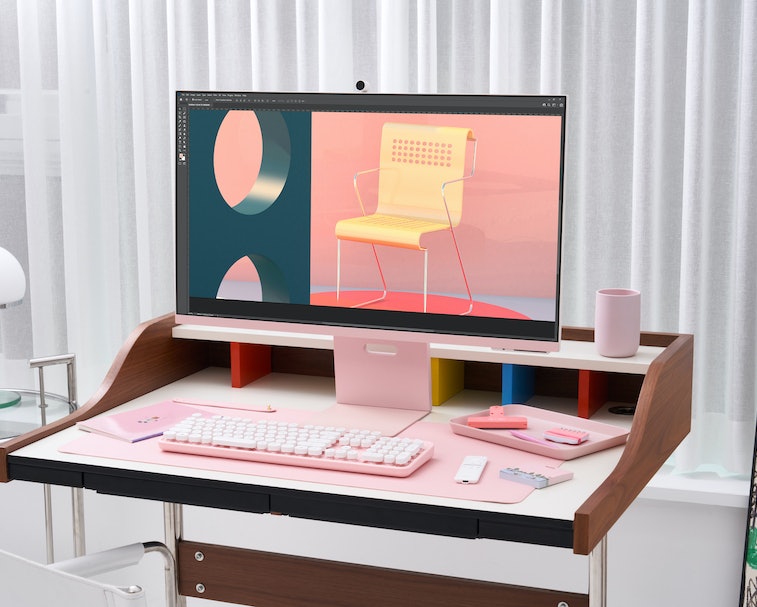 With the peculiarities of Apple’s new Studio Display still fresh in everyone’s mind, Samsung is starting this week with a display of its own — the Samsung Smart Monitor M8 is available to reserve now starting at $700.

The company announced this 32-inch smart monitor at CES 2022 earlier this year — we were distracted by other monitors, specifically the curved 55-inch Odyssey Ark — and where it slacks in a few ways in comparison to the Studio Display, it more than makes up for it with everything else.

A Samsung TV — At its most basic, the “smarts” of the Smart Monitor M8 series are Tizen. The smart TV version of Samsung’s operating system has all the streaming apps you could possibly want like Netflix, HBO Max, and Apple TV+, and handy features like AirPlay 2 if you’re coming from Apple’s ecosystem.

For controlling the display and apps there’s a remote or your pick of smart assistants, including Amazon Alexa, Bixby, or Google Assistant. If you opt to not connect the display to a computer at all, there’s even built-in Samsung DeX support and Microsoft’s cloud version of Office to handle productivity tasks.

Those features could presumably become even more comprehensive when Samsung rolls out its “Gaming Hub” later this year, with support for game streaming services like Google Stadia and Nvidia GeForce Now.

A Samsung monitor — The M8’s 32-inch display supports HDR10+, has a 3,840 x 2,160 resolution, and a 60Hz refresh rate. Ports are a bit limited, with only one micro HDMI port and two USB-C ports (one with passthrough 65W charging). I imagine Samsung would say it traded some port options for the overall thinness of the display (a respectable 11.44mm), but it would have been helpful to have more.

Magnetic webcam — What the company did include is a webcam. The bundled “SlimFit camera” magnetically attaches to the back and top of the M8 for Zoom or as Samsung and Google continue to insist, Duo calls. It’s hard to say how it compares to the Studio Display’s webcam without trying it, but I’m glad it’s bundled for free.

Built-in 2.2 channel audio means you can probably make do without shelling out more money for external speakers. We haven’t tested the display, so I can’t guarantee anything amazing, but it should at least be loud enough for your desk.

Apple looks — Intentional or not, the M8 is clearly riffing on the flat, rectangular, and colorful designs that have trickled through Apple’s ecosystem over the last two years. There are shades of the 2021 M1 iMac redesign with the pastel colors (on Samsung’s display they cost $30 extra) and squared-off chin. There are important differences too — Samsung’s M8 has a height-adjustable stand at no additional cost, unlike the Studio Display.

Samsung hasn’t announced the actual release date of the Smart Monitor M8, but you can reserve a white model with the webcam included today for $700. Getting the M8 in green, pink, or blue costs $729. Unless you really need 5K retina resolution, the Smart Monitor M8 sure beats paying $1,600 ($1,900 for the stand with adjustable height) for Apple’s Studio Display.