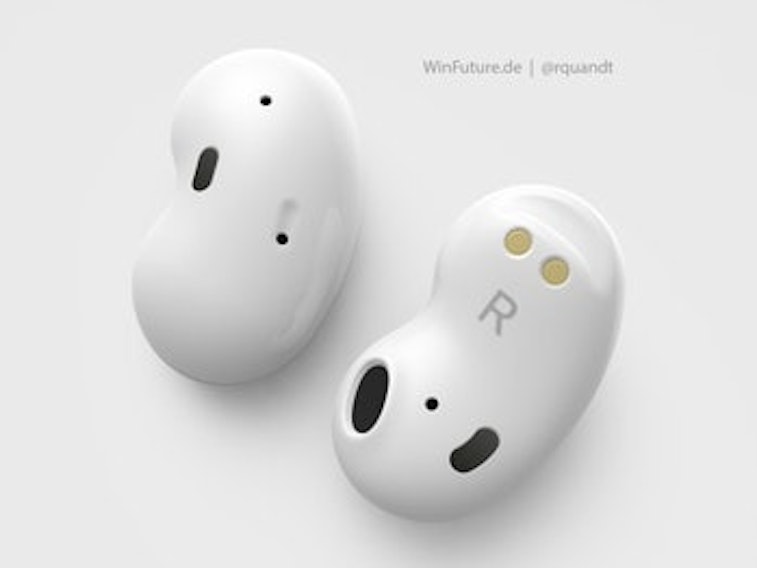 Samsung's next-generation version of its Galaxy Buds will feature active noise cancellation (ANC) and come in at around $140, according to a new report out of Korea. Further, trademark applications filed in Europe and the UK suggest the bean-like true wireless headphones that will succeed Samsung's existing Galaxy Buds+ will be called the Galaxy BudsX.

The Galaxy Buds+ came out back in February and in our review we said they're the best alternative to Apple's AirPods today. The lack of active noise cancellation was our biggest gripe, so Samsung could really push itself ahead of Apple and the rest of the competition if it's able to incorporate the technology and keep the $150 price from the Galaxy Buds+. Apple's AirPods Pro feature ANC but cost $249, while the standard AirPods that don't include ANC cost $159.

The wireless earbud market is heating up — Google released its Pixel Buds 2 yesterday and Microsoft is expected to drop its Surface Earbuds within weeks. Both products come in at higher prices than these rumored Galaxy BudsX, and neither includes ANC, though they do have other unique features like real-time language translation.

At the end of the day, though, sound quality is pretty high up on the list of the important features, and ANC tends to improve the listening experience by cutting out ambient sound, especially really loud noise like trains on track or jet engines. Also how often do you really need to be translating speech from people around you?

A good fit is key — We'll have to wait and see (or hear, rather) how well the ANC works on the Galaxy BudsX if there aren't silicone tips to help with sealing external noise out. But if the fit is good, the experience could still be solid. If the hardware hits the right notes it could make the bean-lookalikes a really attractive proposition for Android users.

Google has its native Assistant and Translate products to sell you on. Microsoft has translation and integration with Office 365. Samsung doesn't have those — remember Bixby? Active noise cancellation in the Galaxy BudsX at a competitive price could really be Samsung's standout feature. We'll likely find out more when the Galaxy Note 20 drops later this year.