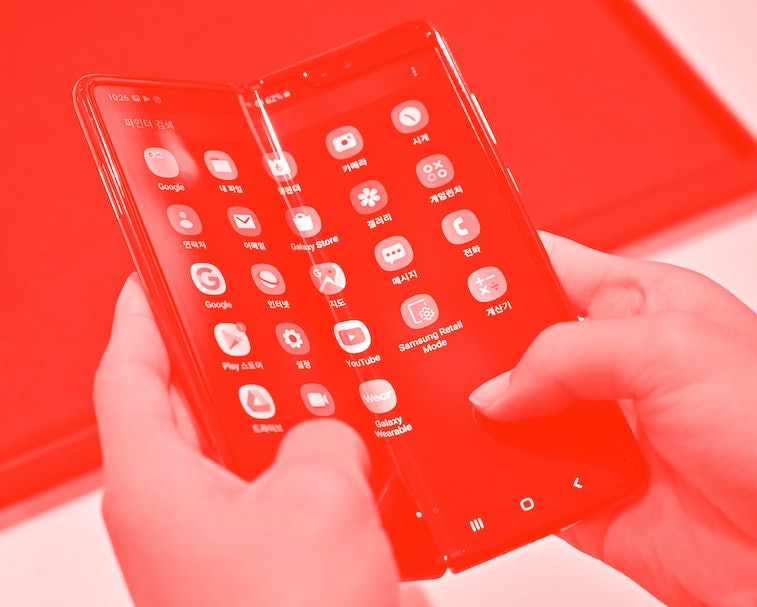 Samsung’s rumored “Galaxy Z Flip” foldable phone is probably going to be expensive, like the other foldable phones out there, and now we have a potential price: $1,400. It will also reportedly be exclusive to AT&T initially but Samsung will eventually sell an unlocked model.

That new information comes from XDA’s Max Weinbach, who also recently reported that the Galaxy Z Flip will have a “locking” function so that you can keep the phone fixed in one position for watching movies or conducting video calls.

Pray for glass — For that steep price, the phone is said to feature the holy grail: a more durable display made of “ultra-thin glass” rather than the plastic seen on Samsung’s first foldable, the Galaxy Fold, and Motorola’s upcoming Razr. Corning, the company behind Gorilla Glass, said last year in an interview that it’s almost ready with an ultra-thin folding glass for smartphones. Besides being more durable than plastic, the properties of glass mean that there wouldn’t be any ugly crease at the fold.

And I oop — Motorola was very boastful and confident when it said that it wouldn’t release a folding phone with any asterisks, but recently had to temper those expectations for the Razr with a notice that “bumps and lumps on the screen are normal.” The phone at least folds completely flat, unlike the Galaxy Fold which had a small space when folded that allowed for dirt and debris to get inside.

If Samsung’s Galaxy Z Flip really does have a glass display, I can understand the price a bit more. Our current smartphones don’t have “bumps and lumps” on them, and I don’t think most people are willing to drop $1,400 for a phone that is all but guaranteed to have them. Heck, we don't even know if people will get much value out of a phone that can fold.

But with a durable display and some apparently solid internal specs, I could see a market for the Z Flip. Weinbach says the phone will go on sale February 14.