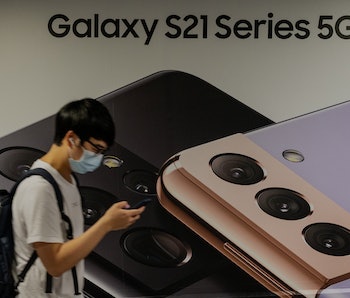 Samsung is at long last removing one of the worst parts of its stock apps: advertisements. The company has confirmed that ads will soon disappear from every default Samsung app, including the likes of Samsung Weather and Samsung Pay. The confirmation comes after mobile chief TM Roh made comments about potentially getting rid of the ads in a recent internal town hall meeting, Korean site Yonhap reports.

“Our priority is to deliver innovative mobile experiences for our consumers based on their needs and wants,” Samsung said in a statement to The Verge. “We value feedback from our users and continue our commitment to provide them with the best possible experience from our Galaxy products and services.”

As far as we can tell, the needs and wants of consumers here would be the ability to use stock apps — you know, the ones your expensive Galaxy S21 Ultra enables by default — without having to scroll past annoying ads. What a concept.

What took so long? — The decision to “cease the advertisement on proprietary apps,” as Samsung puts it, is not shocking. It was, indeed, much more shocking that Samsung ever thought doing so would fly.

Samsung’s idea for serving advertisements in stock apps, up to and including the baked-in Phone app, dates back more than a year and a half now. Consumers and critics alike have railed on the decision ever since with no trace of sympathy. Who thought it would be useful to serve ads to users who are just trying to make a simple phone call?

These are not low-end phones we’re talking about. Samsung’s entire Galaxy lineup uses Samsung Weather, Samsung Wallet, and other stock Samsung apps for their default daily operations. This means even the Galaxy Fold 3 — which starts at $1,799 — includes ads in its stock apps.

Greedy, Samsung — Serving ads in your proprietary operating system was always a strange move for Samsung, a company that markets its devices as both accessible and luxurious. It’s the type of gimmick we’d expect from Amazon’s Kindle line, where you can trade a lifetime of ads on your lock screen for a $20 discount.

Samsung is not struggling for extra cash. Samsung’s market cap is nearing half a trillion dollars; it’s consistently ranked one of the 20 most valuable publicly traded companies in the world. It brought in nearly $24 billion last year, pandemic be damned.

Samsung hasn’t said yet when it will remove the pesky ads from its stock apps, but it can’t come soon enough.