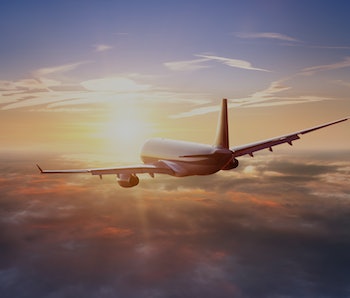 The aviation industry is a significant source of carbon emissions and has been scrambling to find an environmentally-friendly way forward. While many are focused on electric-powered aircraft, researchers at Oxford University have tapped into a new method, according to Wired.

Instead of jet fuel, they’ve essentially liquified carbon dioxide so that planes can run on it. So far, the process is limited to a lab, but at scale, it could create net-zero emissions for air travel and air freight.

It’s Opposite Day — Internationally, the aviation industry creates about two percent of all human-generated carbon dioxide. While that might not sound like much, in 2019, the industry was responsible for 915 million tons of the greenhouse gas. And given how serious a threat emissions pose to climate change and how far away we are from zero emissions, expediting a two percent reduction would be a huge step.

The team of researchers has cleverly reversed the process by applying heat to citric acid and hydrogen, and adding an iron-manganese-potassium catalyst to the carbon dioxide. The organic combustion method they employed not only creates a sustainable fuel source but also creates an opportunity to remove carbon dioxide from the atmosphere.

Plenty of raw materials out there — Researchers used carbon dioxide from a canister and were only able to create a few grams of fuel. If systems were created to repurpose carbon emissions from factories or other sources, however, the yield could actually fuel planes.

In order to actually reach zero emissions, the scientists’ method would have to be powered by a renewable resource (it's no use if you need coal-fired plants to create the fuel, for instance). The potential for solar-powered fuel factories could have planes feeling more like plants than emissions-spewing birds in the future.

Of course, the process will still have to efficiently scale up and face further tests, but one researcher from the team is particularly hopeful. Tiancun Xiao, a senior research fellow at the university’s chemistry department, is also the founder of a green fuel company called Velocys that is working to create alternative fuels for the likes of Shell and British Airways.

Xiao acknowledged there was more work to be done, but told Wired that he is already talking to major players about this carbon dioxide conversion method. With the industry already investing in electric aircraft, from air taxis to luxury jets, the skies are clear (and pockets are deep) for a strong alternative like the very toxin that got us into this mess in the first place.