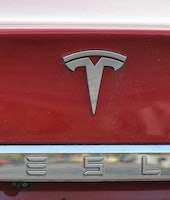 How much Tesla short sellers lost this year as the stock skyrocketed.

Tesla CEO Elon Musk can declare 2020 a victory in his long battle against short sellers. Critics who placed bets against the electric automaker's success lost over $38 billion as its market value rose by over 730 percent during the year, catapulting Musk into second place on the list of the world's wealthiest people behind Amazon CEO Jeff Bezos.

Short squeeze — According to S3 Partners, that loss might be the biggest investors have ever faced betting against a single company. By short selling a stock, skeptics are borrowing shares and immediately selling them at their current market price. If the stock price falls, short-sellers can repurchase them at a discount before returning the shares, pocketing any difference for themselves. But Tesla's share price has skyrocketed amid broader trends towards electrification, meaning short sellers have been falling deep into the red.

Nearly 20 percent of the company's stock was being held up in short positions a year ago, but in 2020 that number fell to just 6 percent. Tesla still has the most short sellers of any company on the stock market, though. Musk has frequently battled against them, falsely claiming that any negative report about his company has been planted in order to sink the stock.

The bear case — Those who remain skeptical of Tesla believe it is benefitting less from fundamentals than from individual investors hyped about its growth and innovation. Tesla fans buy its stock because they love the company and its undeniably sleek cars. Those loyalists are more likely to hold for the long run than institutional investors managing other people's money and only interested in returns.

Tesla has long been the company to invest in for believers in electrification. Now that seemingly every legacy automaker is entering 2021 with ambitious plans to go zero-emissions with their fleets, you no longer necessarily need to bet on Tesla in order to bet on electrification more broadly. Tesla will also stop receiving credits from laggard automakers that have helped to make it profitable and will face fresh challenges as more companies offer EVs.

At a market value of nearly $700 billion, Tesla is worth more than the nine largest car companies combined — even though it's only expected to deliver half a million cars for all of 2020. A record number for the company, but not nearly on the same scale as the tens of millions that the big automakers produce each year.

Be careful – There may still be a bear case for Tesla, but it might not be a good idea to bet against the company going into the new year. It will soon open new factories in Austin, Texas, and Berlin, Germany, with further plans to expand into India. Tesla is also aggressively driving down the price of its batteries in order to achieve CEO Elon Musk's long-sought-after goal of producing a $25,000 car. President-elect Joe Biden has expressed interest in electrification and green energy, which could mean new subsidies for EV buyers.

Tesla likely has at least another year during which it can pull levers that will keep the growth train going. Betting against it, no matter what you think about Elon Musk himself, probably isn't smart.