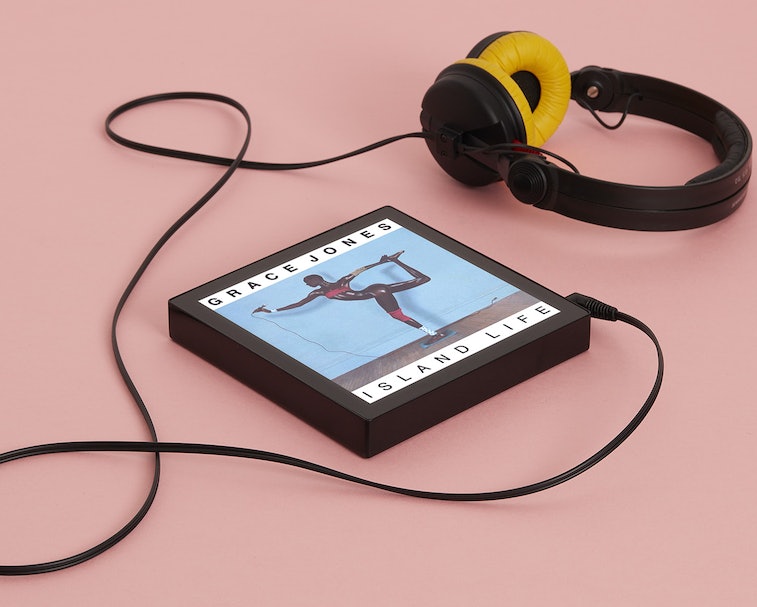 Digital music dominates contemporary consumption because, unlike physical media, it's extremely convenient, portable and, thanks to streaming services like Apple Music and Spotify, cheap. But there's something important that's lost with digital albums... something that's at least one of the reasons vinyl continues to boom and now challenges digital album sales: the album art.

A new product called Sleevenote from designer and musician Tom Vek wants to fix that. Essentially a square iPod-like digital music player with a high-quality, high-resolution display, the product is aiming to raise over $655,000 on the crowdfunding platform Indiegogo. And it's an all-or-nothing campaign, because the custom display dictates that to make the project feasible, at least 1,000 units will need to be made.

Essentially a smart LP sleeve — Featuring a 7.5-inch (measured diagonally), high-resolution touchscreen display and unobtrusive, physical controls on the top edge, Vek's prototype of the Sleevenote offers playback at up to 24-bit/96-kHz via a Cirrus HQ Digital Audio Converter (DAC), a 250 GB solid-state drive, support for Wi-Fi and Bluetooth, and yes, a headphone jack.

The Sleevenote will also support audio streaming from services like Spotify and Apple Music from the get-go through built-in Bluetooth and WiFi, with more options to come depending on demand. It's album artwork relies on an app of the same name that Vek's been working on since 2013, and which musicians can upload high-res album artwork to.

"Album artwork, the original and most authentic presentation of music, has been miniaturised (sic) and compromised in the transition to digital," the campaign blurb reads. "Whether or not you remember the heyday of vinyl or even CD, albums have always come with extra stuff that you've been missing. Sleevenote wants to lead the digital album artwork revolution."

Pay to play — The Sleevenote is still raising funds, with an eye on an October 2021 release. The starting price for a unit is a pretty hefty S700... which is pricey considering you still have to put content on it, and it's hardly as portable as an iPod or smartphones. But, considering average audiophile economics, that's not totally ludicrous. We do wonder how many people are going to be willing to spend that, though, when they can get the Sleevenote app for free and run it on an old iPad propped up on a stand. We love the idea, nonetheless, though, because album art matters and great examples of it are part of our collective cultural history. Seeing them as 1-inch thumbnails does them, and us, a disservice.