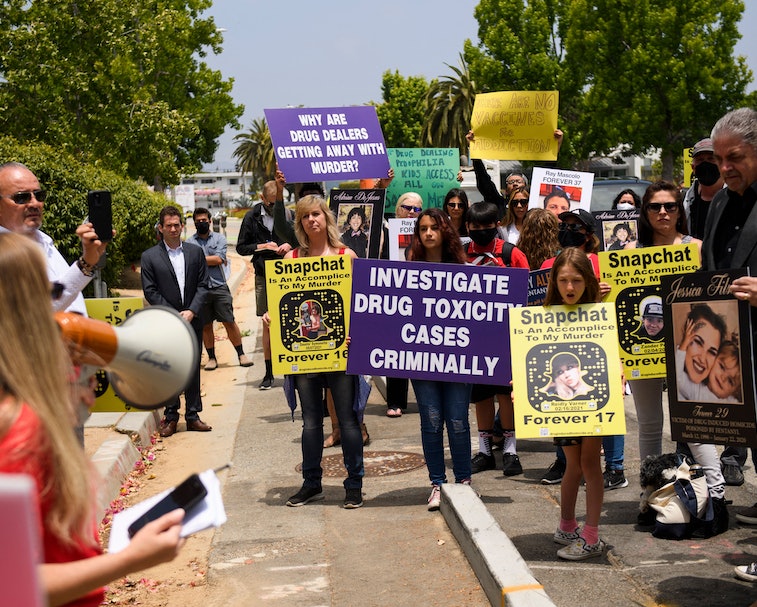 Snapchat is rolling out a set of new tools and warnings to keep drug-dealing off the platform The Verge reports. Snap cited the “devastating impacts of the fentanyl crisis” as its most pressing reason for the update.

The new in-app tool, called “Heads Up,” will prompt users to read content from substance abuse experts when searching for drug-related keywords on Snapchat. Along with the new portal, Snap says it will now take more proactive action against those found to be dealing drugs on the platform, with better detection and reporting tools.

This move comes less than a week after NBC News ran a revealing (and, quite frankly, depressing) feature spotlighting eight parents whose children had died after buying fentanyl-laced pills on Snapchat. The report made it clear that it’s far too easy to buy pills on the platform — “as easy as ordering pizza,” one parent said.

In development for months — Snapchat says it had already been working on solving its drug problems for months. The educational portal is the biggest change would-be drug-buyers will see; it includes stark information from expert organizations like Song for Charlie, Shatterproof, and Substance Abuse and Mental Health Services. The CDC will be adding resources to the portal, too.

Even more importantly, Snapchat is ramping up its drug-dealer detection systems in a major way. Snap says its enforcement rates have more than doubled already in the first half of the year, with its AI systems detecting 260 percent more offending content than the year prior. More than two-thirds of all drug-related activity is being caught ahead of time now, and response time for sending info to law enforcement has improved by 85 percent.

Is Snapchat culpable? — In the last few years, the United States’ fentanyl crisis has spiraled out of control. More than 70,000 people are estimated to have died of fentanyl overdoses in 2019, up from about 20,000 two decades ago.

Social media platforms like Snapchat are not the direct cause of this issue, but the ease of access is certainly making it more difficult to combat. Snapchat is, unfortunately enough, the perfect place to target teens and young adults who might have no idea just how dangerous buying Xanax or Percocet on the internet can be.

There is some precedent for Snap to be held responsible for fatal activities fostered by its platform. In May of this year, an appeals court ruled that Snap could be sued for a speed filter that led to a fatal car crash. It’s unusual for an internet company to be held culpable for the behavior of its users — Section 230 usually sees to that — but that doesn’t mean Snap is entirely invulnerable. Other messaging apps like Telegram have also faced pressure to remove users and groups engaging in illegal activities from their platforms.

Snapchat holds a unique place in the social media landscape; an incredible 90 percent of 13 to 24-year-olds in the U.S. use it. This tool could be life-saving for that demographic.