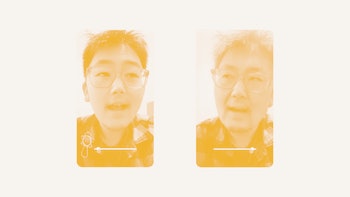 Snapchat’s latest augmented reality filter, called Time Machine, allows users to appear younger or older in real time. Apparently, all users want from their phones is the ability to see what they’d look like when they’re wrinkled and gray. FaceApp’s aging filter went viral earlier this year, too, despite the app’s iffy privacy access. Download at your own risk.

Aging is easier than ever — The feature uses a slider that can be moved left or right to age and de-age faces. The AR lens can be used on either the front- or rear-facing cameras. However, the slider feature is only available on the iOS app right now — Android users can only access five different age groups from baby to old person.

AR brings in the Snaps? — This isn’t Snapchat’s first rodeo involving age-related filters. Earlier this year, the app’s baby filter brought millions of users to Snapchat, according to the company’s second-quarter earnings report. The company’s gender-swap filter also launched a meme and brought more users to the app. In total, Snapchat has added more than 20 million new users in 2019.