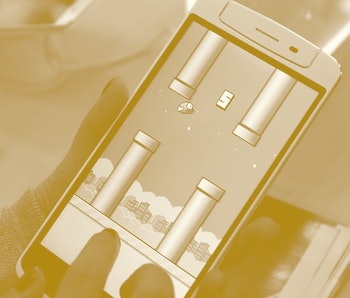 Imagine it: a notification pops up on your Mac that you don’t loathe but actually welcome, because clicking on it loads an addictive game that can break you from your monotonous job for a few minutes of fun. Software engineer Neil Sardesai has created just that with a hack for macOS that runs a full, playable version of Flappy Bird from inside a push notification.

The hack works by loading a web version of Flappy Bird into the notification using the macOS UserNotificationsUI framework, which allows app developers to customize the way notifications are presented.

The proof of concept hasn’t been publicly released, but if it does see the light of day, corporations the world over may see significant decreases in productivity. Flappy Bird was a hit sensation when it launched in 2013 on Android and iOS. The 2D side-scroller saw players control Faby, tapping on the screen to make the bird fly and dodge green pipes on the way to getting the highest score possible.

Too addictive — Flappy Bird proved to be so addictive that its Vietnam-based creator Dong Nguyen actually pulled the game from app stores, citing guilt as a major reason. “Flappy Bird was designed to play in a few minutes when you are relaxed,” Nguyen said in an interview with Forbes. “But it happened to become an addictive product. I think it has become a problem. To solve that problem, it’s best to take down Flappy Bird. It’s gone forever.”

But, unfortunately for Nguyen, his efforts were in vain, as many clones of Flappy Bird were quick to take its place, including the browser-based version used for this notification hack.

For those of us who continue to work from home, we can only hope that Sardesai makes the concept a reality. Who doesn’t want a nice little notification popping up and reminding you to take a breather? Just don’t play for too long if you can help it, or you might find yourself not-working from home.