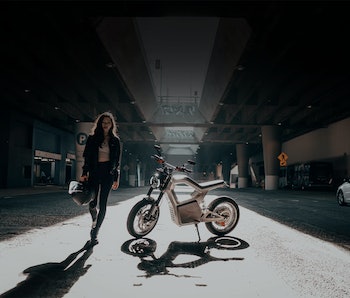 Electric bike manufacturer Sondors has released a video demonstrating how the battery in its upcoming Metacycle electric motorcycle can be removed. First unveiled in January, the Metacycle is notable for its sleek aluminum body and remarkably low price of $5,000.

Sondors says the 4-kWh battery in the Metacycle can provide roughly 80 miles of range on a charge, though that’s calculated at an average speed of around 40-45 mph. In a test video released last month, Sondors shows the Metacycle travel about 50 miles along California’s Pacific Coast Highway, after which it still has 20 percent capacity remaining.

Remove and charge — When it’s time to charge up, riders have the option to plug up a charging cable, or, where an outside charger isn’t accessible, they can remove the battery from the Metacycle and charge it separately. The video below shows a keyed locking mechanism at the front of the battery. Pushing the key in disengages the battery and allows the unit to slide out of the side of the bike. A handle on the side makes it easy to carry the battery like a briefcase — though it apparently weighs 54 lbs, so “easy” is relative.

Thoughtful considerations — The 80 miles of quoted range isn’t as good as a traditional motorcycle, but making the battery removable helps address that. Sondors says that the negative space below the bike’s seat and above the battery can be used to store an optional 4-kilowatt range-extending battery that can be swapped in for more mileage. You don’t see that on combustion bikes.

Sondors doesn’t think that people are actually going to be removing the battery from their bikes often, typically opting to plug in a power cable instead. But making the battery removable adds some convenience and broadens the potential market beyond those with easy access to a power outlet where they park. Also, the battery is the most expensive piece of the bike, so riders can take it inside for peace of mind.

For a bike that only costs $5K, Sondors has done some great work with the Metacycle. The company has developed something of a reputation for creating solid electric bikes at accessible price points.

Production on the Metacycle has ramped faster than Sondors expected, so the company has opened up pre-orders for more customers. The bike is set to ship in the fourth quarter of 2021.