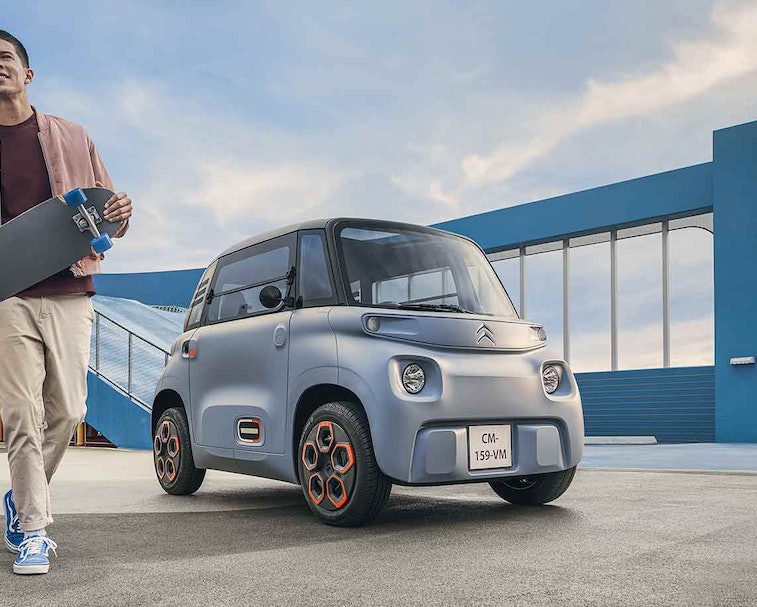 Free2Move, a car-sharing and subscription company with operations in several European countries, is expanding its service to the United States. And it’s adding some cute new cars to boot.

The company has been testing its services in Washington, D.C. and Portland for some time now, but what’s notable today is that Free2Go says it is introducing electric cars from Citroën to the latter city’s fleet. This would mark the French automaker’s first real entrance into the U.S. market, though Free2Move says it’s only testing five Citrogën AMI’s for now.

From Paris with love — The AMI is a tiny, ultra-compact, and low-speed electric car that’s ideal for urban environments... particularly European ones with narrow streets and limited parking. It only has a 5.5 kWh battery and 6 kW motor onboard, capable of 44 miles of range and top speeds of 28mph. In France, the AMI’s tiny footprint means it’s not even considered a car and is instead categorized as a “light electric quadricycle,” and can be driven by people as young as 14-years-old without a license.

“In its commitment to promote sustainable and efficient mobility, Free2Move will be testing 5 ultra-compact, low-speed Citroën AMI 100% electric mobility solution in Washington DC,” writes the company. “Members of the Free2Move carsharing service will receive the opportunity to test AMI and provide feedback on its usability, drivability and applicability for future use in carsharing fleets in the U.S.”

Car-sharing — There already exist similar car-sharing services around the U.S., like Gig, Zipcar, and Revel, the latter of which recently announced it would add Tesla’s Model Y to its fleet of free-standing cars. Using a smartphone app, these services allow customers to rent a car by the minute, and instead of returning the car to its original location, customers end the rental at their final destination. It’s quite convenient if you’re trying to ferry some groceries or Ikea furniture across town and don’t own your own car. And by sharing vehicles you’re putting fewer on the road.

A tough business — But car-sharing is a tough business, and the industry is littered with failures — in America, at least. Car2Go (now called ShareNow), the largest car-sharing network in the world and a joint venture between Daimler and BMW, exited the North American market in 2019, citing business challenges including tough competition and poor economics. GM’s Maven car-sharing service, meanwhile, shut down at the height of the pandemic.

These services were envisioned as a way for carmakers to generate new revenue while insulating them from drops in car sales. But the economics are tough because they’re competing with the likes of Uber and Lyft, and other micro-mobility solutions like e-scooters and bike-share services. Prices need to be competitive, but the fleets of cars require costly shadow workforces to keep them maintained and refueled. ShareNow has done better in Europe, where it has said there is better infrastructure supporting electric vehicles.