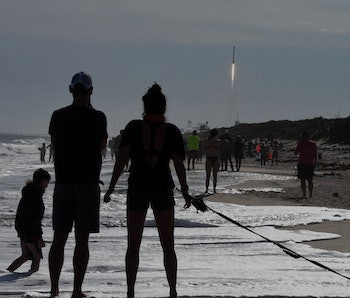 Satellites from OneWeb and SpaceX’s Starlink almost collided in space last month, an accident that could have lead to a cascading effect of debris spreading out and causing further collisions. Both companies are creating services that beam high-speed broadband internet to rural or underserved parts of the world.

On March 30, days after OneWeb sent a batch of satellites into space, the US Space Force says it sent several “red alerts” to the company warning of a possible collision with a SpaceX satellite. OneWeb operates its constellation of 146 satellites at a higher orbit around Earth than SpaceX’s Starlink network; whenever new ones are launched, they have to transit through Starlink’s territory to reach their destination.

Satellite-based internet could meet the demands of businesses like freight ships and trucks, and satisfy governments’ desire to get rural citizens faster internet. SpaceX’s ultimate goal is to commercialize space transport and travel by civilians with eventual colonies on Mars.

Once alerted, SpaceX and OneWeb cooperated to direct their satellites away from one another. But it was done in good faith — there currently exists no international framework for managing objects in space and no real liability for crashes.

Space junkyard — Experts have long warned about the risks of space becoming too crowded. The potential for cascading crashes was coined all the way back in the 1970s as the “Kessler syndrome,” a theoretical scenario in which the density of objects in low-Earth orbit is high enough that collisions of objects create hundreds of pieces of space debris and even more collisions.

NASA has called low-Earth orbit a “space junkyard” filled with millions of pieces of rockets, spacecraft, and satellites flying at speeds up to 18,000 miles per hour. All that fast-moving junk poses a safety risk to anyone trying to go into space, like astronauts going to the International Space Station. The station itself had to redirect itself three times in 2020 to avoid space debris. That won’t help America’s ambitions of sending people to the Moon again before eventually venturing to Mars. Former President Trump was a big proponent of sending Americans back into space, and before leaving office issued a National Space Policy that commits to “preserving the space environment” with new international policies around space debris.

Removing objects moving quickly in space is expensive and difficult, but several companies have entered the nascent sector with the intent purpose of removing debris from orbit. We’d like to suggest fishing nets fitted with magnets.