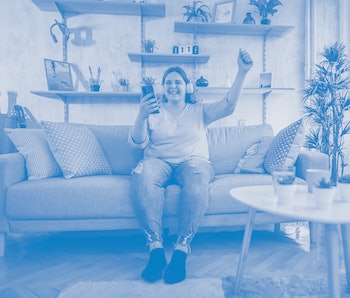 More than a year and a half after first testing the feature, Spotify is finally rolling out synchronized lyrics to all users. Yes, even users on the freemium tier will have access to the lyrics across all their devices.

The new feature is made possible via collaboration with Italian company Musixmatch, which has long operated an app that provides real-time lyrics for songs in your library. Musixmatch has global partnerships with just about every music-streaming service, as well as with Instagram, Facebook, and Google Search. It provides the lyrics database used when adding songs to your Instagram story, for example.

Spotify says the lyrics feature combines two important parts of its business: “creating the best possible listening experience and listening to feedback from users.” This statement is somewhat laughable — if Spotify were really committed to listening, it would’ve made the feature available for everyone years ago.

It’s unclear what caused the delay; Spotify has implemented very similar features more than once in the past. But it’s here now, at least.

Here’s how to find them — Spotify’s lyrics are available beginning today for just about every version of its app: iOS, Android, desktop, smart TVs, PlayStation, and Xbox are all receiving the update. The lyrics aren’t too difficult to find, though you do need to know where to look for them.

On both the iOS and Android versions of the app, you’ll want to navigate to the Now Playing screen — that’s the one with the full-sized album art — and swipe up. The lyrics will scroll as the song plays. The mobile app will also let you share selected lyrics via a Share button at the bottom of the lyrics screen.

It’s about time — Long-time Spotify users have really been put through the wringer with this whole lyrics thing. Every time Spotify has begun implementing it, the feature is pulled not too long after.

Spotify used to allow third-party apps within its own application, and this made lyric-synchronization possible — but Spotify Apps were discontinued in 2014. Spotify announced a partnership with Genius, another lyrics company, in 2016, but that functionality never made it beyond just select playlists. Musixmatch’s lyrics seemed to be rolling out in February 2020, too, but they never made their way past a test phase.

Today those Spotify users constantly Googling lyrics can finally let out an extended sigh of relief. Let’s hope the lyrics stick around this time.