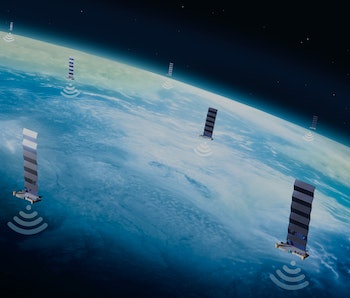 SpaceX’s high-speed satellite internet service, Starlink, could be available for moving vehicles like trucks, ships, RVs, and planes (just not Teslas) by the end of the year, according to a recent tweet from noted Dogecoin enthusiast and self-described Tesla “Technoking”, Elon Musk.

Starlink opened up its pricey “Better Than Nothing Beta” in late 2020, and has already been reporting some objectively impressive speeds in extremely remote locations. With the regular launch of additional satellites, Starlink’s coverage should continue expanding to meet Musk’s once far-fetched promise. Credit where credit is due to you, Mr. Musk.

Already proving itself extremely helpful — While far from its final stated goal of 42,000 satellites orbiting Earth, SpaceX’s Starlink is already showing its potential in some serious situations. Last fall, Washington state emergency officials praised Starlink’s internet coverage and speeds while battling rampant, destructive wildfires. Here’s hoping they didn’t have to pony up the current $499 setup fee alongside the $99 per month subscription.

Environmental concerns — Of course, this is a massive project with some serious drawbacks to consider. Those 42,000 satellites we mentioned? Not great for light pollution, especially when you consider there are currently around 2,800 up there as we write this. And that doesn’t even factor in the thousands of other orbiting satellites we could start seeing above our heads when you factor in similar internet projects from companies like Amazon, and even our own military. In fact, it’s such a concern for professional and amateur stargazers that the FCC could face legitimate legal blowback for approving Starlink and similar projects.

Watch your heads — And then there’s the whole issue of space traffic congestion, which unsurprisingly will only become more of a concern as we launch thousands of additional satellites into orbit in the coming months. Earlier this month, SpaceX and OneWeb satellites nearly collided with one another, an accident that could have sent debris hurtling towards Earth while also causing similar, cascading accidents.

Only a few weeks earlier, debris from a SpaceX rocket caused an impressive light show over Portland and Seattle as the Falcon 9 “failed to make a deorbit burn.” While any residual hunks of flaming metal wound up somewhere in the Rockies close to the Canadian border this time, it’s certainly something to keep in mind as more and more trips to low-Earth orbit continue for not just Starlink, but its numerous competitors.