Starlink internet speeds are about to get a lot better, Musk says 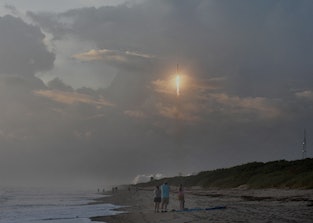 Download speeds, in megabits per second (Mbps), that Starlink will achieve in 2021.

Elon Musk wrote on Twitter yesterday that Starlink, the satellite internet service being developed by SpaceX, will soon achieve speeds on the ground of up to 300Mbps. The comments were made in response to an early Starlink customer who reported speeds of 130Mbps in an initial test.

"Speed will double to 300Mb/s & latency will drop to ~20ms later this year," Musk said. Latency in layperson's terms refers to the time between requesting a site and seeing it appear on-screen.

Space internet — Initially seen as one of Musk's more outlandish ideas, up there with transporting people underground in pods and colonizing Mars, Starlink is quickly becoming a real thing. The service today has more than 900 satellites in orbit providing connectivity, and early customers are already getting access.

Satellite-based internet service is not a new concept, with existing services like HughesNet servicing rural populations where fast and reliable internet is scarce. But Starlink is remarkably faster than today's options. It's able to achieve such faster speeds by sending up many more, smaller satellites that can provide planet-wide coverage; eventually, SpaceX hopes to have a total of 12,000 satellites orbiting Earth.

Musk in a further tweet said that Starlink should be accessible across the entire planet by 2022.

Limitations — Though doubling Starlink's speeds would be impressive, Musk has been uncharacteristically humble about its potential. He has repeatedly said he believes 5G cellular and ground-based internet service will always beat Starlink's in dense urban areas. With satellites, requests have to make the round trip to space and back — a longer trip than ground-based networking.

Starlink is also limited in the amount of satellites it's permitted to send up into space, and for that reason infrastructure on the ground will remain denser and able to handle more load. But in low-population communities where internet providers have historically underinvested, Starlink could be a marked improvement over existing options.

Starlink is made possible in part thanks to SpaceX's primary business commercializing space travel. Its innovations in reusable rocketry have made it much more affordable to send payloads into space, and today companies are able to send their own micro-satellites into space piggybacking off other missions. Since Starlink will only ever service rural locations, keeping costs low is crucial for viability.

Blue Origin, the Jeff Bezos-owned competitor to SpaceX, also has plans of developing a satellite constellation for internet connectivity. Satellite-based internet services could someday serve as an additional revenue stream for these companies.