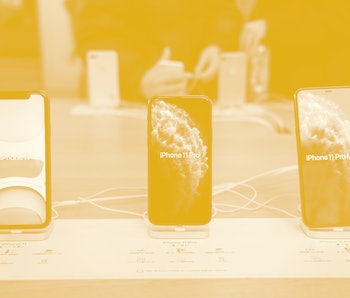 Apple suppliers will start production of a new, cheaper iPhone next month and it could go on sale as soon as March, according to Bloomberg. Design cues for the phone will come from Apple’s iPhone 8, and it’s expected to offer a 4.7-inch screen. The last time Apple made a “budget” phone was back in 2016 when it launched the iPhone SE, which was modeled on the iPhone 5 range but offered new specifications for key features like the camera.

Similarly, the more affordable iPhone will likely include the chipset from the iPhone 11 and some of its camera hardware. If there’s a home button with a built-in TouchID fingerprint sensor like the one found on the iPhone 8, it’s unlikely there’ll be a screen notch, nor the facial recognition lock that notch enables. For the target market, though, that may not matter.

Cheaper iPhones could drive sales — Apple continues to sell its iPhones and AirPods in droves in developed markets, and its plans to bolster the share of revenue it derives from subscription services are well underway, but emerging markets that balk at $1,000 handsets still present massive opportunities for the brand if it can produce desirable devices for half that price.

The iPhone SE cost $400 when it launched, so we’re expecting pricing for its ideological successor to be in a similar bracket. That’s still on the upper end of the mid-range for markets like India and Nigeria, but Apple’s culture cachet as a luxury brand means that sort of ballpark price could still prove palatable to buyers who’d otherwise stick to the plethora of choices Android offers in that range.

New sensors, but old designs — First there were reports the iPhone 12 was going to look like the iPhone 4, then another report disputed that and said they’ll be largely unchanged from the 11. Meanwhile, other reports don’t talk about the design but claim there’ll be a new 3D sensor for scanning objects. What are we to make of this?

With the September launch of the flagships a long way away, it’s too early to put too much faith in any iPhone 12-related rumors. But a cheaper handset before then makes sense, and at least we only have to wait until next month to see whether it comes to pass.