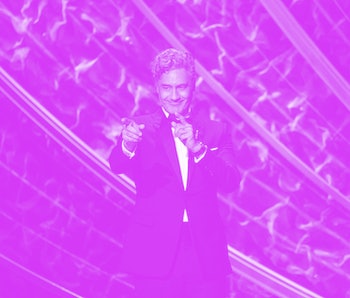 Oscar-winning writer and director Taika Waititi pulled no punches about Apple’s loathsome butterfly keyboard in an interview following his Sunday night win at the 92nd Oscars. Asked about some of the needs writers should ask to have addressed in upcoming talks with the Writers’ Guild of America (WGA), Waititi said, “Apple’s needs to fix those keyboards,” without any hint that he, the perpetual joker, was anything but deadly serious.

[Apple keyboards] are impossible to write on. They've gotten worse. It makes me want to go back to PCs.

“They are impossible to write on. They’ve gotten worse. It makes me want to go back to PCs. Because PC keyboards, the bounce back for your fingers is way better. Those Apple keyboards are horrendous,” he added. Those are fighting words if ever we’ve heard them.

The Magic Keyboard doesn't impress him either — In the same interview, published by Variety, Waititi also aired his grievances about the latest iMac keyboard, which he said has given him various maladies, including “shoulder problems” and issues with “that tendon that goes from the forearm into the thumb.” Mimicking a T-rex, Waititi seemed unhappy at the compact dimensions of Apple’s Magic Keyboard and argued “the WGA needs to step in and actually do something.”

Of Maori and Jewish descent, New Zealander Waititi is the first person of indigenous origin to win an Oscar for screenwriting. He took home the statuette for Best Adapted Screenplay for his comedy Jojo Rabbit. The film was also nominated for Best Picture, but Waititi is unlikely to mind having lost out to Bong Joon Ho’s Parasite, because he’s regularly fanboyed over the Korean director on the awards season trail in the run-up to this year’s Academy Awards.

Taika's wish is Apple's command — Sure, Apple’s fixed the problem with the 16-inch MacBook Pro. But that’s more MacTop than most people need. Reports suggest Apple’s going to roll-out its new-old keyboard when it next updates the 13-inch MacBook Pro and Air ranges… so Waititi and the rest of us are going to get our wish.

For the rest of the Mac loyal who are stuck with butterfly keyboard until their MacBook dies, our heartfelt condolences. And a friendly reminder of Apple’s not-quite-a-mea-culpa repair program. Maybe this time next year we won’t be reporting on Apple keyboards any more, nor on male-only Oscar winners lists. We live in hope.