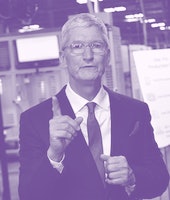 The share of the market's gains from Apple and Microsoft alone

Apple and Microsoft’s share prices lept 85 percent and 55 percent respectively in 2019, making their combined share of the S&P 500’s total growth just shy of 15 percent, according to a report from CNBC. The growth recorded by the pair is larger than that of the next eight contributors combined, and all of the top five positions went to tech companies, with Facebook, Alphabet, and Amazon completing the lineup.

A tale of two trillionaires –– This year also saw Apple and Microsoft reach and breach $1 trillion market capitalizations, the only U.S. companies to do so. Apple first achieved that valuation in August 2018, but market fluctuations saw it move above and below the benchmark in the months to follow.

Part of Apple's success came from sales of the iPhone 11 and iPhone XR, along with strong demand for its updated AirPod lineup. Apple’s expected to have another excellent year in 2020 on the back of new 5G-enabled iPhones and a possible bundling of its subscription services, Apple Music, TV+ and Arcade. Which could make it a target for more optimistic extortionists, but we reckon it's willing to take the risk.

Microsoft’s performance stemmed from growth in its PC business, cloud services, and its Xbox division. Bank of America predicts the company will also turn in solid numbers again next year, too.

New records abound –– Depending how the markets behave on Tuesday, the S&P could record its best year since 1997. This year’s already been the best since 2013. We expect to see a tweet from the President taking the credit any minute.