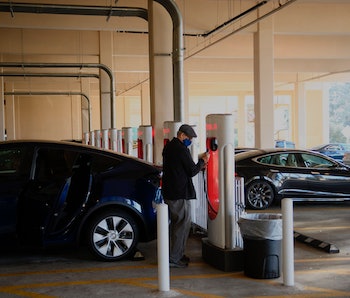 The stations have, up to now, exclusively charged the company’s own cars, and that’s been seen as a special perk of owning a Tesla. But opening the 25,000 stations to allow any car to charge at them could boost CEO Elon Musk’s stated mission of advancing a sustainable future, as Tesla by far operates the largest electric charging network in the world.

Questions answered — There were questions about the specifics of how exactly Tesla would open up the stations to anyone, as they use a proprietary charging connector found only in its cars and not those from other automakers. The answer is simple: Tesla will supply adapters that allow cars using other standards to plug up. It will also open up access to its mobile app, where drivers can add their credit card information and reserve stalls for charging.

We are thinking about a real simple thing where you just download the Tesla app, you go to the Supercharger, you just indicate which stall you are in, you plug in your car, even if it’s not a Tesla, and you just access the app to tell “turn on the stall that I’m in for how much electricity,” and this should work for almost any manufacturer’s electric car.

Business — By opening up Superchargers to anyone, Tesla could also potentially create a new line of revenue. As more and more cars on the road become electric, they’ll need somewhere to charge up, and Tesla can be that provider. It would add to Tesla’s whole idea that it will be a general provider of green energy products, rather than a simple manufacturer of automobiles. Tesla doesn’t disclose how much money, if any, it makes off Superchargers, where even Tesla owners must pay to juice up.

Standardization — Tesla’s Superchargers are held up as the best possible charging stations out there. But the proprietary nature of the stalls has long been a point of concern that could make building charging infrastructure more difficult (and expensive). Musk has said that Tesla made its own proprietary charging system, including high-speed chargers, because there simply didn’t exist a standard that was good enough before it came along.

The Biden administration has sought to support the transition to electric vehicles by spending billions on new charging stations, but it’s unclear how it will decide what types of stations could receive funding. Some electric cars have adopted an open standard called Plug and Charge, which allows them to connect to 90 percent of public charging stations automatically, without needing to use a special app or sign up for an individual charging service. But other new cars including the new Chevy Bolt EUV continue to be released without adopting the standard — a pain because you might need to download a new app at whichever station you’re visiting. And for Tesla owners, charging up at non-Supercharger stations requires using an adapter.

Adding support for other cars to the Supercharger network may increase congestion at stations, though most drivers presumably do most of their charging up at home, overnight. Electric car charging stations are most useful when traveling long journeys.

The bigger question is, what will charging look like in the future? Hopefully it’s not a confusing mess like it is today.