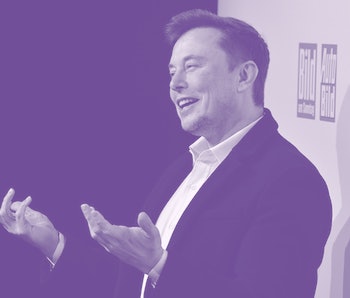 Tesla was spotted driving a Model S with retrofitted sensors around the Palo Alto area this weekend, and electric car enthusiasts are going wild with speculation. The well of news for Tesla fanboys has been somewhat dry lately, so this sighting feels pretty big right now.

Electrek reader Matt Crowley submitted photos of the test rig this weekend, and the publication was able to confirm with Tesla that the company was indeed driving the car, which was equipped with manufacturer license plates.

But other details about the test rig are scarce at best; Tesla isn’t ready to speak about what, exactly, it’s testing with these sensors. That leaves us with just speculation and estimates to best understand what’s going on with the test rig. Based on the size and placement of the sensors, the most pervasive guess is that the testing is actually to provide benchmarks for the Cybertruck’s Autopilot feature.

What’s on the rig? — That’s a very good question, and it’s another that’s reduced to guesswork here. The rig itself is intriguing for the very fact that it’s much larger and bulkier than the car riding beneath it.

Several different sensor types appear to have been installed on the Model S, including the angled sensors Tesla uses for the sides of its current vehicles. Electrek notes also the presence of LIDAR sensors on the rig, which measure distances using lasers. Tesla has in the past said it doesn’t use LIDAR on its finished products,

Cybertruck improvements, maybe — Tesla’s forthcoming Cybertruck is already the stuff of legends, with its seemingly indestructible design and sleek, brutalist aesthetic. It’s the kind of vehicle that we could see powering our lives whenever we end up moving to Mars.

But we’re still not exactly sure what the Cybertruck’s driving capabilities will be, or where in the development pipeline those features might currently be. Electrek and its readers speculate that, based on its shape and size, this testing rig might actually be early sensor testing for the Cybertruck’s own Autopilot feature.

Tesla could also use this suite of sensors for other, larger vehicles, too, like the much-rumored Tesla semi-truck.

There’s also a chance the testing rig we see here is just being used to make improvements to the Autopilot sensors in Tesla’s existing line of vehicles, which haven’t been updated since 2016. Either way, it's clear Tesla is putting serious effort into letting its vehicles drive themselves into the future.