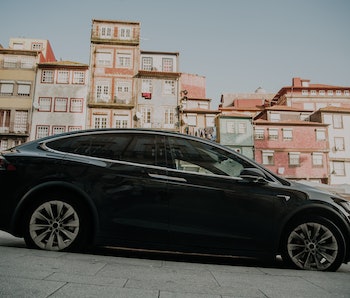 Tesla has started rolling out a new software update to its cars that brings with it some convenient new features. Namely, notifications that alert you to open doors or windows, and an ability to automatically adjust the height of your car contextually, for instance depending on your location or previous settings.

The first feature is called "Car Left Open Notifications," and it's pretty straightforward. If you ever leave the trunk, frunk, or any door open for more than 10 minutes the Tesla app will send an alert to your phone. It will also alert you if all the doors are locked but a window is open. That could be pretty useful if you've ever had that experience of accidentally leaving a window open during a rain shower. Too bad it can't automatically detect rain and close the windows by itself, but maybe that'll come with a future update.

Protect your old knees – The ability to dynamically update the suspension of a Tesla is also new. Now the suspension in Model S and Model X vehicles can be set with temporary or permanent heights based on your location. For instance, if bending down to get into your car is uncomfortable, you can set the "Always Auto-Raise at this location" function to ensure your car is sitting as high as it can go whenever it's parked in your driveway. As you start driving, the car will revert to its normal height.

The ride height can also be temporarily set to its maximum height in circumstances like snowy conditions where it might otherwise get stuck in dense snow mounds.

As one Redditor showed, the new suspension options give you a lot of flexibility to make adjustments based on your exact needs:

The more affordable Model 3 and Model Y do not have air suspension that can be adjusted, so they won't be getting this feature.

Making old cars new again – These are two pretty useful features and they demonstrate the luxury of connected cars that can receive continual updates enhancing their capabilities long after leaving the sales floor, something that was unheard of before Tesla started doing it, but that is becoming standard for other carmakers. In the past these types of frequent updates never happened and even if a manufacturer did release a software update, installing it required visiting a dealership and having a technician complete the job. Now it just happens over Wi-Fi.

Tesla has faced some criticism recently, however, after the U.S. National Highway Traffic Safety Administration (NHTSA) announced in June that it's investigating the failure of the company's touchscreens in Model S cars produced between 2011-2015. The cars can still be driven but much functionality normally dedicated to physical buttons, like climate control, has been replaced by software buttons – especially in newer Model 3 and Model Y cars. That poses some concerns for what happens to those cars as they age. It's also been facing complaints about quality control issues with the Model Y.

You've got the power — Another feature that came in this new software update is improved charging through the Powerwall during outages. Basically, if you have a Powerwall backup battery installed in your home, it will now charge your car during an outage until the Powerwall reaches a minimum charge level. This guarantees that your car doesn't suck up energy that you may prefer to use keeping the lights on in your house, but likewise that you have enough juice in your car for your commute.