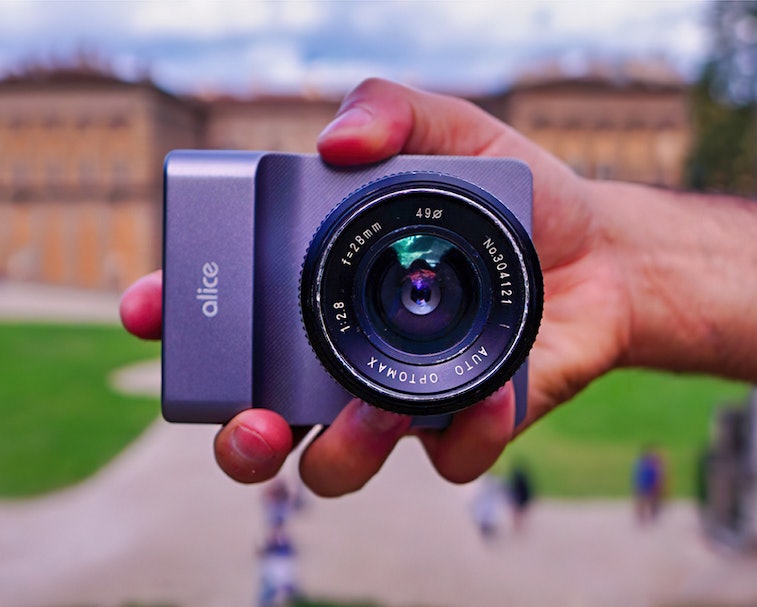 Today's smartphones have remarkably good cameras, in part because they compensate for their small image sensors with artificial intelligence that can recognize a scene and correct for variables like low-light or problems like chromatic aberration. But the larger sensors found in DSLRs still provide better low-light shooting and higher-quality images... and so a startup called Photogram has decided to blend the two concepts to create the best of both worlds.

Called the Alice Camera, the Micro Four Thirds shooter promises to take the convenience of shooting on a smartphone and add the quality of a DSLR and interchangeable lenses. The camera features an 11-megapixel sensor from Sony, which may seem low, but Photograms says the individual pixels are large and therefore capture more light and less grain than what you'd get in a smartphone.

Mass appeal — The London-based company says it spent the last 18 months refining a prototype with the help of over a thousand creators, optimizing the experience for super-fast sharing across social media. The camera relies on a smartphone as the controller and viewfinder. It connects via Wi-Fi, and images and footage can be transferred instantly. Users can also use the Alice to livestream to services like YouTube or Twitch.

The real market for the Alice is likely the casual photographer who wants better images for Instagram but doesn't necessarily want to deal with the learning curve of a full-size camera. That's really what the professional market is up against in 2021: smartphones today produce great pictures without the user needing much know-how. With DSLRs, the optics might be better, but unless you know how to adjust the complicated settings you may have a hard time actually taking advantage of all that power.

Seeing as the professional market has been struggling as a consequence of these trends, a camera like the Alice could be an interesting way to bring people back — the influencer market is huge — even if it may not appeal to professionals who believe in their own skills more than those of an intelligent chip.

Ease of use — In order to give the Alice the same image enhancement techniques as a smartphone, it features a built-in Google AI Tensor Processing Unit (TPU) and a reprogrammable chip optimized for high-resolution video processing, which the company says will be improved with regular updates. Photogram says the camera uses deep learning techniques to automate focus, exposure, and color balance.

Pretty fly Wi-Fi — The Alice isn't the first camera to offer wireless connectivity to a smartphone, but other solutions are often clunky and don't feature the same type of AI smarts that enhance pictures in real-time. Photogram really wants to deliver post-processed shots straight out of the camera. It says that the algorithms are conservative by default, so they won't give users some crazy artificial-looking treatments. But users are also given a high level of control over the creative process through intuitive controls.

The sample shots from the Alice are promising enough, but at this stage, its production is being crowdfunded on Indiegogo and the camera hasn't actually been released. Deliveries are anticipated to begin in summer 2021. The retail price is £750 (~$955), but early backers can pre-order a base model for £550 (~$758).

As this is a crowdfunding campaign, buyer beware: the camera may turn out not as great as promised. And there's always the risk that the project could dissolve and backers could lose their money. Photogram is backed by the United Kingdom Government’s Innovation Agency, however, so that's reassuring. But the question remains, will the Alice really be good enough to justify carrying it around instead of just, you know, a Canon or a Fujifilm camera.

More like this
Jackson Chen
6.21.2022 2:00 PM
Reviews
As a longtime Nikon user, Sony won me over with the a7 IV
Sam Hill and Raymond Wong
16 hours ago
Guides
How to change your iPhone photos from HEIC to JPEG
Raymond Wong
6.15.2022 1:57 PM
What a surprise
Nothing reveals Phone (1) design before leakers do