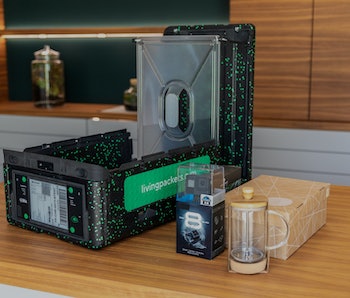 Boxes: everyone uses them, everyone ends up with way too many of them in the basement, and yet no one seems interested in improving them. Except for LivingPackets, that is, a startup focused on improving the future of packaging around the world. LivingPackets is showing off its flagship product, The Box, at this year’s all-digital CES, and we’re impressed by its vision, to say the least.

The Box is nothing like your average shipping container. For one thing, it’s reusable many times over — think of the difference between wrapping your leftovers in plastic wrap and using a glass storage container instead. Once used for a delivery, The Box can be returned to the shipping company and then reused for future shipments, or used by recipients for returns.

And that’s only the beginning of The Box’s innovation. Because it’s built to last, The Box is also packed with sensors, which allows it to solve lots of other classic shipping problems. With four years of research behind it, The Box could be just what our online economy needs to move sustainably into the future.

No waste at all — The Box’s most tangible innovation over traditional cardboard containers is that it’s reusable — LivingPackets estimates each box can complete 1,000 trips before being replaced.

But the company’s zero-waste commitment goes far beyond just being reusable. The Box has an e-ink address display, so there’s no need to print shipping labels. And inside The Box is a mechanism that holds products in place, eliminating the need for bubble wrap or other wasteful packing supplies.

Incredibly secure — Here’s the thing about The Box: because it’s meant to be reused many times over, LivingPackets has included loads of technology. And that means loads of features.

The Box includes a tracking mechanism, so companies can track their products without relying on USPS or FedEx employees to scan the right barcode. And get this — The Box includes an electronic lock that can only be unlocked by the recipient. Now that’s the kind of security we can get behind. There are also sensors for temperature and orientation, so The Box can warn a sender or delivery company if something goes wrong in transit.

But will companies use it? — The Box has the potential to be industry-altering. Eliminating the need for cardboard boxes while also making our shipments infinitely more secure? Sign us up!

The obstacle, then, is convincing companies to adopt it. Because the only way it works is if it's adopted at scale. Like, say, but Amazon or Walmart. No one wants to have a pile of LivingPackets pile up in their home, and if they need to be collected, that reduces their eco-friendliness. What's needed is ubiquity so they can move between users regularly and easily.

LivingPackets promises that, in the long run, purchasing and using The Box is just as affordable as buying a comparable number of cardboard boxes. Still, cardboard boxes with paper shipping labels are very much the backbone of traditional e-commerce — we expect it to be quite a while before The Box becomes anything close to standard.