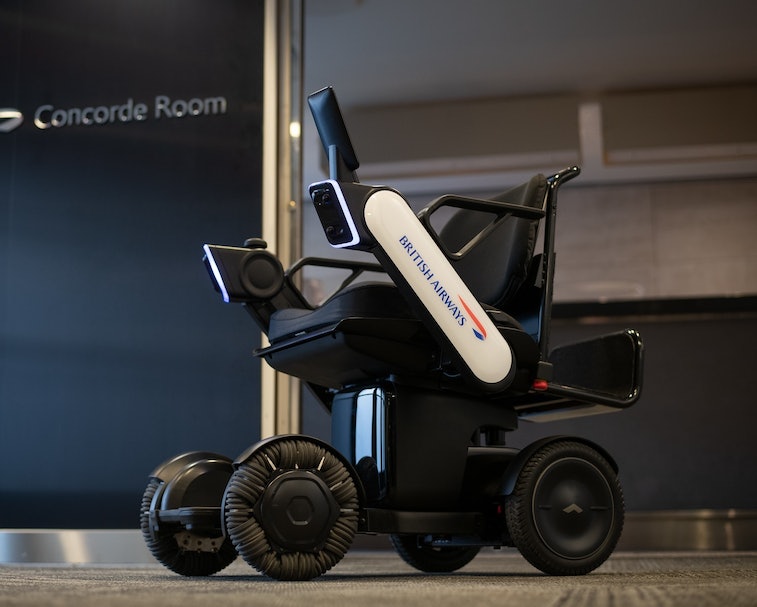 “The vehicle safely navigates the terminal without the need for assistance from travel companions or the airport support team, currently responsible for escorting customers from check-in directly to the boarding gate,” British Airways says in a release detailing the trial.

The wheelchairs, created by Japanese company WHILL, not only propel themselves and uses cameras and sensors to avoid obstacles, like pedestrians, but also incorporate mapping technology with a selection of preset destinations within the airport that riders can navigate to. For instance, once a rider gets their boarding pass they can use a touchscreen on the chair to select their boarding gate as the final destination — and even add stops along the way, like a restaurant.

Drives itself home — After the rider reaches their destination, the wheelchair rolls itself back to a docking station where it awaits its next rider. Unfortunately these bad boys max out at a top speed of 5 MPH, but we're assuming travelers who usually have to rely on wheelchairs at airports tend to leave more time to get to their gate than the rest of us usually do. Also, air travel is crazy enough without people racing robot wheelchairs between gates — as fun as that sounds.

British Airways says half a million of its customers require assistance each year, and the airline believes autonomous wheelchairs might be one way to make the travel experience more comfortable. “Our customers tell us they would like greater independence and control over their journey through the airport, so we were keen to trial autonomous devices and see our customers’ response to the very latest mobility technology in a real airport environment,” said Ricardo Vidal, British Airways’ head of innovation.

British invasion — We wondered why the British chose to test their robo people carriers in the U.S., and not in, say, Heathrow Airport in London, but it turns out they're adding Heathrow's Terminal 5 to the trial soon. Which makes us feel decidedly less suspicious.

Honestly once British Airways is done rolling out these wheelchairs their next move should be to introduce autonomous chairs for all passengers — something like Segway's self-balancing S-Pod, perhaps. We're tired of walking. So very tired.