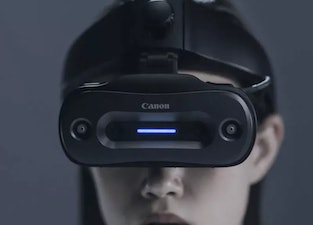 How much Canon's MREAL S1 is set to cost.

Canon Japan is releasing a new mixed reality headset in February aimed at enterprise users called the MREAL S1. The headset is its lightest yet following the MREAL MD-20, which was 250 percent heavier at 480 grams, versus just 137 grams for the new model. The S1 is also just a really cool looking headset, but it comes at a cost... $38,500. Then again, enterprises will pay a lot more for cutting edge tech than the rest of us will.

As an enterprise-focused headset, the MREAL S1 is designed for work with industrial applications, in particular CAD (computer-aided design) software. One use case Canon provided in a promotional video (below) shows a woman place a 3D model of a car into the physical world and then walk around it, opening the doors, and even getting inside.

Augmented reality's ability to place objects into real environments has a lot of potential in collaborative work, something that Apple CEO Tim Cook has said makes him feel the technology is going to be "profound" in the future. Apple is rumored to be working on a form of glasses that blend AR and VR, though it may release a more limited VR headset sooner.

New ways to work — As another example, Facebook last year released a demo of a "mixed reality workspace" concept in which a person wearing a VR headset sits at a desk and interacts with a series of virtual floating windows they can move around by grabbing them. Typing on their real keyboard, the person can see their hands and their surrounding workspace. But they can augment it with limitless monitors displaying information.

The MREAL S1 creates mixed reality environments using two sets of stereoscopic camera arrays. The first array is for passing through images from the real world, so virtual objects can be rendered in the physical environment, while the second array is for capturing depth so that objects are placed accurately in the physical space. There are also sensors for positional tracking.

The headset is fully customizable so that users can get the right fit around their heads. It can also be used handheld, mirroring the way you might use a smartphone to look at AR objects.

Canon is only selling the MREAL S1 in Japan, as was the case with its previous headsets.