The EU is planning a right-to-repair bill for 2021

“The linear growth model of ‘take, make, use discard’ has reached its limits.” 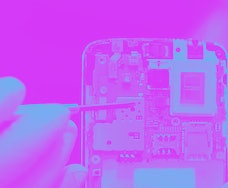 The European Commission plans to introduce a "right to repair" bill that will force companies to make gadgets that last longer and are easier to repair or recycle. The new rules set to be introduced by 2021 will cover phones, tablets, and laptops.

European Commissioner for the Environment Virginijus Sinkevičius said that without taking such a drastic move, the bloc would be unable to reach its goal of producing zero-emissions by 2050. A new "circular economy" will see people use their devices longer, with parts from discarded gadgets making their way into new ones.

As it stands right now, we're essentially ripping the Earth up to produce each new iPhone rather than reusing parts from old but still oftentimes perfectly good phones. And the rise of electric cars and other more sustainable practices addresses some emissions from fossil fuels but not the destructive, dangerous mining activity necessary to source cobalt for the batteries.

We can't keep extracting from the earth forever — “The linear growth model of ‘take, make, use discard’ has reached its limits," Sinkevičius said. "With the growth of the world population and consumption, this linear model pushes us closer and closer to a resource crisis. The only way ahead is decoupling economic growth from extraction of primary resources and their environmental impacts.”

Under the bill, hardware makers will need to design their phones, tablets, and laptops with sustainable designs that use repairable or replaceable parts. It's expected to look similar to an eco-design law introduced by the EU last year that applies to home appliances. Companies that make those products must supply replacement parts for up to 10 years. It's unclear whether this new bill would have the same requirement, but consumer gadgets would at least have to be made with more sustainable designs.

Why can't the U.S. get with it? — Right to repair bills have been making their way through the United States, but those efforts are moving slowly and nothing is happening at the federal level where it could have the greatest impact. Apple has been fighting a bill in California that would require companies to do what the EU is proposing. The company, which ironically touts itself as a leader on environmental sustainability, argues that consumers could hurt themselves if they were to make mistakes during repairs, like by puncturing a battery.

That doesn't mention Apple's tight control over independent repair businesses, which it makes jump through many hoops in order to acquire replacement parts and service devices, limiting the amount of shops that can offer such services and consequently raising prices. Apple also makes its devices impossibly hard to repair by soldering parts together rather than using removable screws — the EU bill is likely to cut down on this sort of thing.

By pushing such a bill overseas, the EU might be the ones to finally make something happen here.