The EV industry needs a better system for recycling batteries 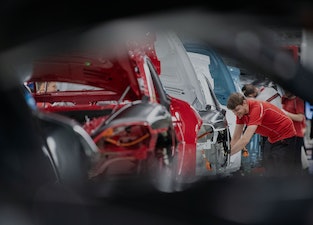 The amount of lithium ion batteries that end up being recycled.

Electric cars have reached escape velocity. Nearly every automaker has finally accepted that it can no longer sit by the sidelines and hope the trend towards electrification will be a fad, because it won’t.

But while electric vehicles in theory are far more environmentally friendly than combustion engine cars, there are still some hurdles to overcome before they are truly contributing zero emissions to the environment. The BBC this week published a story about the challenge of recycling EV batteries so that new batteries don’t require removing so much raw material from the earth.

Recycling is hard — About 5 percent of lithium-ion batteries globally are actually recycled, according to some estimates. That’s mainly because it’s never been economical and techniques for recycling are crude, often involving manual disassembly by a human. The giant batteries in electric cars pose an even greater challenge, as they can be made up of hundreds of individual lithium-ion cells that need to be safely taken apart.

The recycling issue is nothing new. Much of the recycling stream in the United States can end up landfilled because the economics are poor. Virgin plastics have long been cheaper than recycled ones, for instance.

Thankfully, being that batteries are the most expensive component in a car, the rise of electric cars has automakers looking for ways to reuse material as much as possible. Tesla during its “Battery Day” event last year went into detail about how the company is hoping to recover cobalt from old batteries for use in newer ones. Nissan is reusing old batteries from its Leaf guides for use in vehicles that deliver parts around its warehouses. Volkswagen recently opened a recycling plant in Germany where it hopes to soon recycle up to 3,600 battery systems per year.

Investments could bring down the cost of recycling, such as through automation techniques. The U.S. Environmental Protection Agency has also created a $5.5 million Battery Recycling Prize that is incentivizing development of new techniques.

These developments can’t come soon enough as governments around the world push to ditch combustion gas in the coming decade.

Hopeful outlook — Critics of electric cars used to quip that much of the electricity used to charge them comes from energy grids that use coal and other fossil fuels. It’s seemed like a faraway proposition that the world could someday be powered totally by renewable energy, but it’s coming faster than you might think. For a brief period last week, California generated 95 percent of its energy from clean power. The UK has also been breaking records for its use of renewable energy.

So these challenges can be overcome. It’s lazy to dismiss electric cars because the battery problem hasn’t been solved yet. There hasn’t been incentive to do the work of tearing these batteries apart since there haven’t been many electric cars on the road in the first place. But maybe now that tides are turning, dismantling and selling old material could be a profitable niche to enter into. Or governments could step in and require vehicle purchases include a tax that pays for recycling infrastructure. That would decouple the recycling process from the profit motive because companies.

No matter how it happens, electric car batteries must be recycled or else we’ll continue to unsustainably strip the earth and pollute the environment. The less we waste old batteries, the more we’ll have.

More like this
Jackson Chen
Sep. 17, 2022
Tech
Zero’s long-range e-motorcycle is a beast on and off the road
Jackson Chen
Sep. 15, 2022
Tech
Unagi goes all in on subscriptions, scraps premium Eleven model
Annie Rauwerda
Sep. 19, 2022
Culture
A ragtag community is keeping this aughts Wikipedia gadget alive