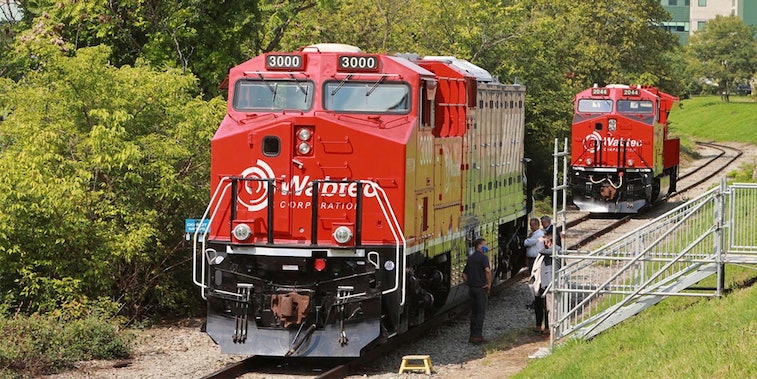 Wabtec, a freight rail manufacturer, has unveiled the latest version of the FLXdrive, which it claims is the world’s first fully electric freight train, The Guardian reported. Building on the company’s 150 years in the industry, the FLXdrive was developed using a grant from the California Air Resource Board. The company recently made its first sale of an FLXdrive to a mining company in Australia, which expects to receive the locomotive in 2023.

Rail transport is already the most efficient way to move goods — due to factors like the low rolling resistance of steel wheels — and accounts for just 0.5 percent of U.S. greenhouse gas emissions. But trucks transport more goods today. Wabtec sees potential for green trains to change the dynamic and encourage more use of the railway system.

Hybrid trains — At this current stage, batteries alone can not get a train across the United States — the diesel fuel commonly used is 27 times more energy-dense than lithium batteries. Wabtec has been piloting a hybrid model wherein the FLXdrive functions as one unit in a series of multiple trains. You throw one electric train along with 2-3 diesel locomotives and essentially turn the whole train into a hybrid, because the FLXdrive can capture excess heat from braking and store it for acceleration. Wabtec says a hybrid locomotive could use 30 percent less fuel.

A new version of the FLXdrive was recently unveiled at Carnegie Mellon University in Pittsburgh, which Wabtec says uses a 7-megawatt battery that has “100 times the power and energy within a Tesla.” The train’s unveiling was used by two attending Democratic politicians to renew calls for $600 million in a Congressional reconciliation bill go towards research into electric freight cars.

Other solutions — Some have questioned why batteries should be used at all. On a fixed line like a railway, perhaps you could place overhead cables that provide power to the trains — like the ones you see commonly on public transit. But that would require a lot of infrastructure to stretch across the United States, including in rural areas that don’t necessarily have electricity. Batteries, then, may be cheaper.

Wabtec is experimenting with hydrogen fuel-cell trains as well. Hydrogen is more energy-dense than lithium-ion batteries, but there’s little infrastructure to support it and actually creating hydrogen is an energy-consuming process, which often means it’s not very green at all. Wabtec is exploring methods of producing so-called “green hydrogen” that’s more sustainable.

Eventually, the hope would be to cut emissions from rail transport altogether by combining electric and hydrogen cells. That could save 300 million tons of planet-heating emissions a year, according to Wabtec.