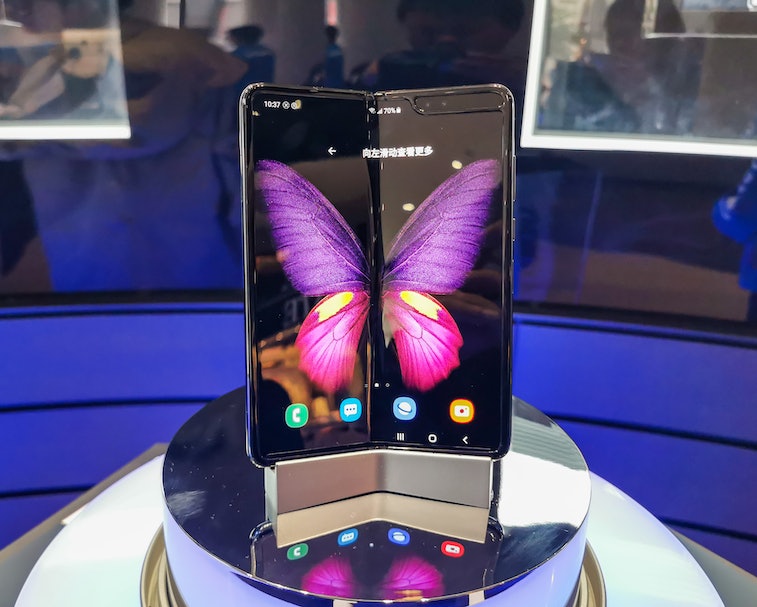 People are buzzing about Samsung's Galaxy Z Fold 2, the company's next foldable device. A recent report from industry insider Max Weinbach indicated the device wouldn't appear at Samsung's Unpacked event on August 5. But now it turns out that the foldable tablet-and-phone-in-one will indeed make its official debut at the now-virtual event that also expected to give us our first peek at the Galaxy Note 20, the Galaxy Z Flip 5G, and, possibly, new bean-shaped wireless earbuds, and a couple of updated tablets.

The correction arrived after the CEO and founder of Display Supply chain Consultants, Ross Young, confirmed the news to GSMArena on Wednesday. On Twitter, Young said, "Fold 2 fans, confirmed with my sources that it will be announced at Unpacked, although may not ship till as late as early October."

"Assembly starts in September," Young added. The founder also took issue with some reports and leaks suggesting that the Fold 2 will be 7.7 inches. "We said on April 20, it is 7.59," Young explained. "No change."

What's in store for us? — There's not a huge amount confirmed about the Galaxy Z Fold 2, but there are plenty of rumors. Those tend to be true, and you can bet everything about the device will be known by the time it's officially unveiled. But we're hoping it addresses the primary problem with the first version, namely the disappointing exterior display. Improving that display would make it easier to manage notifications one-handed, and reduce the wear-and-tear on the folding mechanism, though that will no doubt have been updated and overhauled, too.

Various leaks — like this one from Tom's Guide — have attempted to shed some light on the device, including details about its displays, battery, and the fact that — unsurprisingly — Samsung is working on more foldable devices. Considering its offerings have fared much better than rival Motorola's and made it the dominant player in the fledgling foldable space, that's to be expected. Samsung no doubt wants to extend its lead.

Leaks indicate the Z Fold 2 could have a better, 120Hz refresh rate and that both its internal and external displays will be larger. Also, it's an inevitability that it'll include a more efficient chipset than the Snapdragon 865 found in the first version. Buyers can also look forward to batteries in each half of the device packing a combined capacity of 4,365 mAh.

Experience the Z Fold 2 virtually — The Z Fold 2 is also expected to have support for high-speed 15W wireless charging and a camera array on the back similar to the one found on the Galaxy S20.

Due to the coronavirus pandemic and subsequent in-person event shutdowns, Unpacked will take place virtually, and the chances to try devices in stores are going to be limited. But then again, the Fold is a niche device and those who know they want it will buy it even if they haven't gotten to hold — or fold — it themselves before doing so.