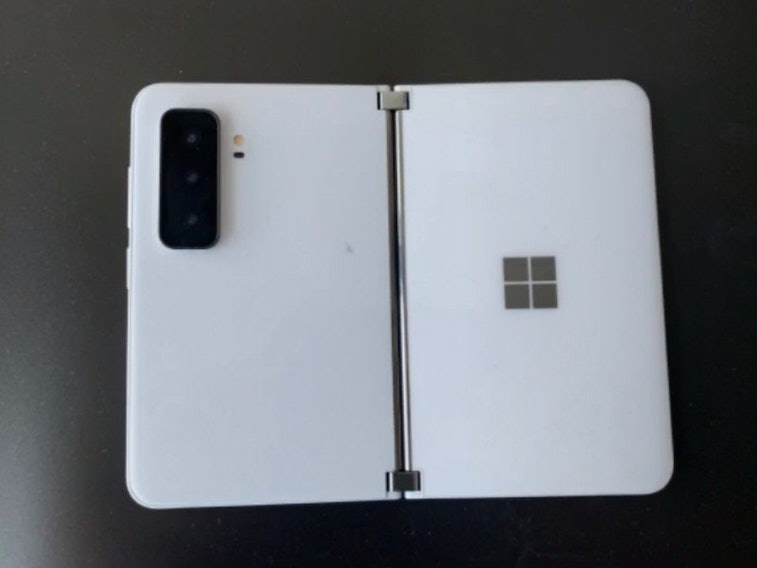 Microsoft just about reinvented the smartphone with last year’s Surface Duo, a dual-screen Android device that Input editor Ray Wong unabashedly calls “the future.” Now we have a first glimpse at an even more future-forward version of the phone, thanks to a leak of unknown origin.

The leaked images, which Windows Central says are indeed legit, focus mostly on the back of the Surface Duo 2. The biggest change seems to be that the second-gen version of the smartphone will include a vertical three-camera array — much like the one made popular by Samsung’s device lineup. It’s rumored to include standard, telephoto, and ultrawide lenses.

In other devices, a camera array would barely be newsworthy; in the Surface Duo, which thrives on being skinny enough to fold backward and become an entirely new device experience, a camera bump is a pretty big deal indeed. The original Surface Duo didn’t even have a “rear” camera to speak of — instead Microsoft opted for a one-size-fits-all in-screen camera that could easily be flipped to the rear.

Mostly the same — Love it or hate it, the original Surface Duo made waves because of its innovative design and powerhouse hardware. Fans of that design will be pleased to hear the next version of the Duo looks almost identical to the original.

Other than the new camera array, the forthcoming Duo looks very much like last year’s, with two screens that fold along a robust hinge. The dedicated fingerprint reader appears to have been ousted, perhaps in favor of one embedded within the phone’s power button. The phone’s single USB-C port is centered on the right side of the phone, now — all very minor changes.

As far as internals go, Windows Central’s intel says the new Duo will include all the latest hardware, including a Snapdragon 888 processor and 5G capabilities. There’s a rumor each screen will be slightly bigger, thanks to slightly thinner bezels.

Is it worth the bump? — The addition of a dedicated camera array on the rear of the new Surface Duo will be a game-changer for the phone’s photography capabilities. Last year’s one-camera solution just didn’t hit the mark in Ray’s testing (not even close).

The bump on the back of the phone will make for a much less streamlined finish, though — likely the reason the first Duo barely opted not to have one. The folding design could be a little more cumbersome with lenses sticking out like that. But in 2021 camera functionality is of utmost importance to the average smartphone user. The design trade-off would be worth it if it made the new Duo more attractive to the masses.

Though Windows Central says it’s confirmed these photos are real, there’s still the chance this is a prototype of some sort. We’ll have to wait and try the new Duo for ourselves when it releases in either September or October.