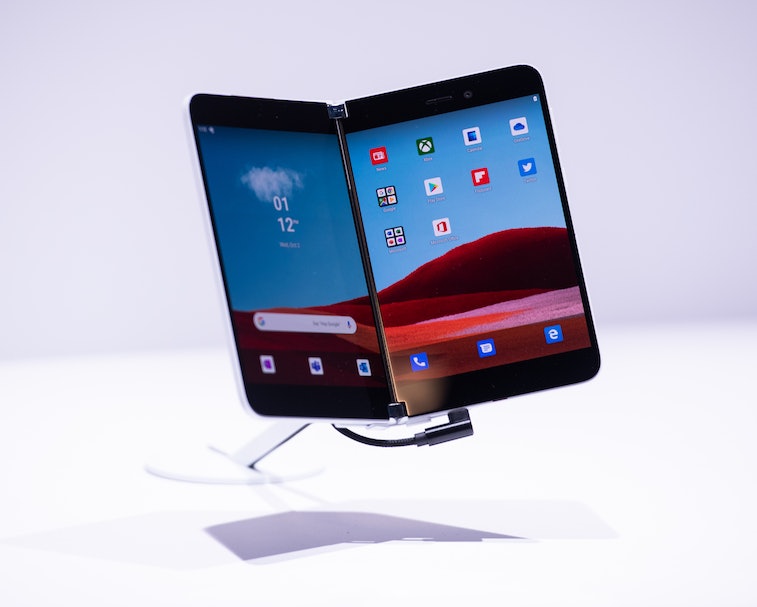 A video on Twitter from regular leaker, WalkingCat, with the one-word caption, “peek”, suggests Microsoft’s Surface Duo will allow users to do just that to catch up on their notifications on the double-screened, book-like device that’s slated for release later this year. According to a second video, Duo users will also be able to see an incoming call using the same method, and then answer it by opening the device completely.

“Peek” could make keeping up with notifications while on the go easier, but even easier would’ve been a small, external display of the sort favored by the Samsung Galaxy Z Flip and Motorola Razr.

Double displays look more durable than folding ones — Of course, Samsung and Motorola’s devices are foldables. The Surface Duo is not. Instead of bending a screen, the Duo uses a pair of displays side by side. LG has taken the same approach with its new V60 ThinQ 5G smartphone. Given the multitude of problems foldables have had — and are likely to keep having for at least a generation or two — we’re not opposed to embracing dual-display devices until the kinks with foldables are worked out.

We’ve already seen some hints concerning the Surface Duo’s user interface thanks to a teaser video released earlier this month, but this leak gives us an answer to the question of how the Duo is going to manage without an external screen. Of course, there’s no guarantee the peek feature makes it to production as the device isn’t due until the end of the year, but it sure makes sense.