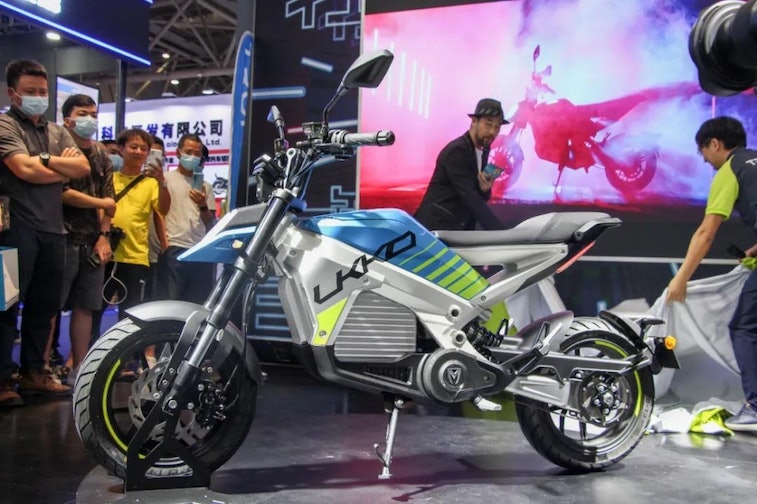 Taiwanese company Tromox has unveiled the Ukko, a mini electric motorcycle with a top speed of 60mph. The Ukko, a successor to the smaller Mino, was recently debuted at the China International Motorcycles Trade Exhibition. Electrek earlier reported on the bike.

The Ukko isn’t that small, but with a seat height of just under 30 inches, even shorter individuals should be able to easily ride the bike. And diminutive size means you’ll be able to dart through traffic faster than on a regular motorcycle and forget about parking fees. It’s ideal for urban transportation and should be an affordable option for city slickers who don’t want to shell out tens of thousands for a full-on electric motorcycle, but who also want something with more oomph than an electric scooter.

If we had to compare the Ukko to anything, it looks a lot like an electric version of the Honda Grom — a comparison Tromox itself has made. That motorcycle, also on the small end, is popular for its easy handling, low price of $4,000, and spunky design.

More fun than practical — Because of the Ukko’s top speed of 60mph, you’re going to need a motorcycle license to ride the it in most of the United States, where it should arrive in 2022. But it’s also a tad too slow for highway use since you won’t have much headroom to pass in the left lane. This really should be something you expect to have fun on, or for inner-city commuting, rather than something you’re going to use for cross-country rides. Unlike a step-through electric scooter, where you could store goods between your legs, there’s no storage on the Ukko. There are at least pegs so you can attach a rear seat for a second rider, though.

The smaller Mino does just 37mph and only has a 2.5kW electric motor, so the Ukko is certainly a step up. The Mino is already on sale in Asia and Europe at a price of about $4,000; Tromox says pricing for the Ukko will be announced at launch. The company is hoping to bring both bikes to the United States.

For comparison, the much-anticipated Sondors Metacycle is priced at $5,000 with deliveries set to begin by the end of the year. But if you’ve got short legs, you might struggle with it. Hopefully Tromox will be able to sell the Ukko bike at a similarly aggressive price.