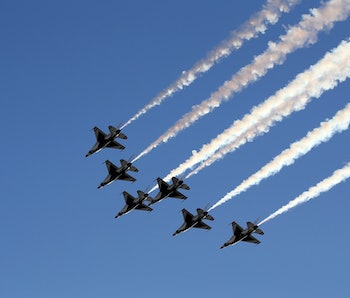 As part of the Next Generation Air Dominance (NGAD) program, the U.S. has simulated, built, and flown at least one prototype of a fighter jet, according to Defense News. NGAD is the Air Force’s effort to essentially create an internet of warfare for drones, fighters, and other network-connected platforms. As a result, any specifications about this jet are classified. The jet is the first experimental fighter to take flight in twenty years.

Fly before you buy — The Air Force has been streamlining the creation of its jets with the help of technology in recent years. The T-7 Red Hawk trainer aircraft, created by Boeing and Saab, was made through digital threading. This process creates a simulation of the jet, not just for pilots, but for mechanics as well. Will Roper, the Air Force’s top acquisition and technology official, told The Washington Post “They achieved the same quality on their first airplane that would normally be achieved on the hundredth.”

Apparently, that is nothing compared to the process for this new mystery fighter, which Roper told Defense News was “not just something that you can apply to things that are simple systems” like the T-7. After analyzing alternatives, it only took about a year to construct a simulator, build a prototype, and fly it with all systems onboard.

Roper claims the Air Force would be able to get the allegedly record-breaking jet into production “pretty fast.” Just how many jets they decide to make will likely have a dramatic effect on the 2022 fiscal budget. Business Insider reports the Air Force’s 2021 budget proposal requests more than $1 billion for NGAD alone, and the service plans to spend about $6 billion on the program through 2025.

“I’ve had people that I’ve been told want to cut the program or they don’t understand why we need it,” Roper told Defense News. “But I have not left a single one of those briefings with anything other than [lawmakers saying]: ‘This is the future, we ought to do it now. And why aren’t we going faster?’ And the answer [to] why we aren’t going faster is simply money. We can push the accelerator down more today because the digital technology allows it.”

Your tax dollars are hard at work, just don’t ask for any details on exactly how they’re being used.